END_OF_DOCUMENT_TOKEN_TO_BE_REPLACED

On Tuesday, the 13th I found myself at U Street Music Hall to see Reptar, with openers Breathers and Young Empires. Though the venue was only about half full, the audience- instead of simply head bobbing to the show- was broken into clusters of people full-out dancing with friends and strangers alike. Reptar was similarly amped up as they tore through their set  with songs from their new album Lurid Glow, as well as material from their 2012 release Body Faucet. Prior to the performance, I was able to sit down and talk with the band’s lead singer and guitarist, Grant Ulicny.

Hillary Dale: So, you and your band are from Athens, Georgia, and I’ve noticed a lot of unique bands are from there—like REM, the B-52s, Neutral Milk Hotel—and they all seem to have very unique sounds. What do you think it is about Athens that makes these unique bands?

END_OF_DOCUMENT_TOKEN_TO_BE_REPLACED

Opening for Ivan & Alyosha was Kris Orlowski, a singer/songwriter also hailing from Seattle. Kris immediately created an intimate performance, playing soft and beautiful melodies, harnessing his dynamic and powerful voice in a plethora of ways. Halfway into his set, he asked the already decent sized crowd to gather in the middle of the room and allow him to play unplugged in the middle of the circle. What should have felt a bit awkward and bit too close comfort felt natural and normal, with Kris playing his tunes to each part of the circle with a soft intensity. He liked talking to the crowd just as much as singing and playing guitar, having many laughs with the audience. Kris then finished up after a few more songs on the stage with what he called a “French exit” where he, without speaking a word, simply finished his last song, unplugged and left the stage. The crowd loved it, and he left to a great deal of applause.

A few minutes later, the five-piece rock combo that is Ivan & Alyosha stepped on stage, welcomed by a wave of ecstatic applause from the now full U Street Music Hall. The band went directly into it, only stopping to talk and greet the band after 2 songs. Everyone in the band was good-natured and smiling, ready to play some music for the eager crowd. The band started with the first two songs of the new record first playing “Something is Wrong” and then thundering into their ballad “Bury me Deep,” filling the small venue with their driving sound. The band was at home playing live music, and excelled in delivering an enthralling and captivating show, keeping the audience on the tips of their toes in excitement. What I noticed most about the band was that they were having a fantastic time, and had no qualms being human in front of the audience. Tim had more than a few conversations with the crowd, bassist Pete Wilson playfully throwing his beer glass at guitarist Tim Kim (no one was hurt). I think throughout the show, every single member of the band besides drummer Cole Mauro stood up on top of the same guitar amp, dancing around.

END_OF_DOCUMENT_TOKEN_TO_BE_REPLACED

When HOLYCHILD took the stage, the 930 club was almost filled, all in anticipation for Passion Pit, and clapped avidly when HOLYCHILD, led by vocalist Liz Nistico and producer and multi-instrumentalist Louie Diller, came on stage. The band’s instruments sported lots of flair and streamers and 3 members were sporting a Hawaiian shirt. Without a bassist or guitarist, HOLYCHILD indeed was different than most bands.

Their sound, defined by them as ‘Brat Pop’, was an upbeat mix between catchy vocals and driving percussion over synthesizers and keyboards, that had many people in the audience dancing and cheering to the music as soon as the set started. There is no doubt that many had not experienced a band as interesting or different as HOLYCHILD in previous shows they’d been to. Nistico danced with absolute energy across the stage in harmony with her singing, never resting in one place too long. Multiple times, Nistico went into the crowd, singing from various locations of the 930 club, including the floor of the pit and on top of the bar.

END_OF_DOCUMENT_TOKEN_TO_BE_REPLACED 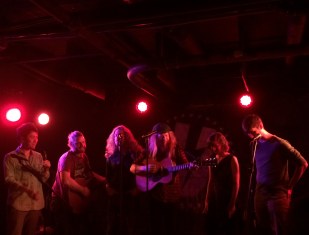 In a half filled, dimly lit U Street Music Hall, Australian Stu Larsen and 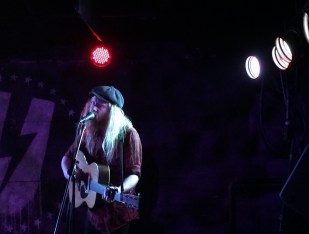 Japanese Natsuki Kurai came on stage to a small but cheery crowd. Stu has been on the road for the last 5 years, having driven some 8,000 miles in the last 3 weeks of touring with Natsuki. He met Natsuki at a concert in Japan, and now they’ve toured across the United States together. The tour started in Japan on April 12th, and ended in Atlanta on May 10th. With Stu on the guitar and vocals, and Natsuki playing harmonica, the two played an incredible set together. Their sound flowed throughout the room, blending between Stu’s earthy and captivating voice, and Natsuki’s explosive and cascading harmonica riffs. The performance felt incredibly intimate throughout the set, with Stu asking the audience to sing the chorus of a few songs, and at one point bringing the opener, Matt Sanders and a few friends on stage to sing a song together. 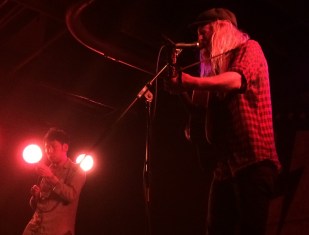 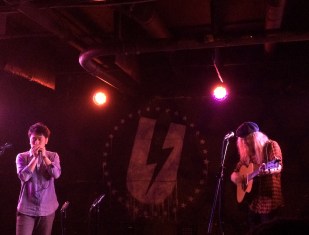 f Stu wasn’t enchanting enough on his own, Natsuki blew it away for everyone in the crowd. Stu and Natsuki were perhaps at their best when they played “This Train” a song from Stu’s 2011 album, Ryeford. Amidst Stu’s vocals and driving guitar, Natsuki went crazy with the harmonica playing mind bending riffs. Most of all, the show felt natural and intimate. Perhaps it was the nature of the venue, but I think it was mostly from the warm atmosphere created by Stu and Natsuki. The duo played music from all of Larsen’s albums, mostly playing from his most recent album, Vagabond, which was released in 2014. The show was all in all a wonderful, heartwarming experience, like a conversation with old friends and new.