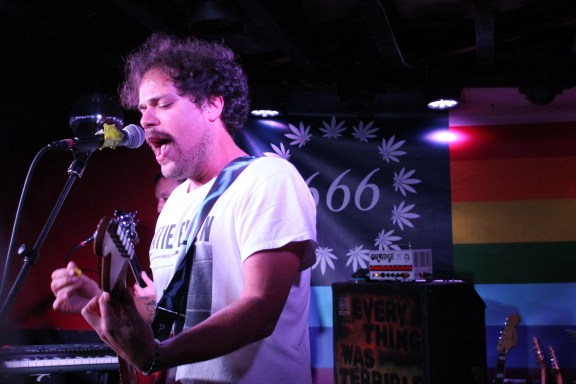 Jeff Rosenstock, the DIY music legend and prolific artist, played DC9 Thursday night for one of the last days of a tour with Hard Girls and Katie Ellen.

The Long Island frontman has been a part of many successful bands and has an extensive discography tied to his name. But, his solo career has not gone unnoticed either. With the release of his third solo LP, Jeff Rosenstock has been selling out shows and continuing to spread compassion and love in dark political times. The new album, Worry, is reflective of the disillusioning environment Rosenstock sees today, releasing emotion to every listener who plays it. 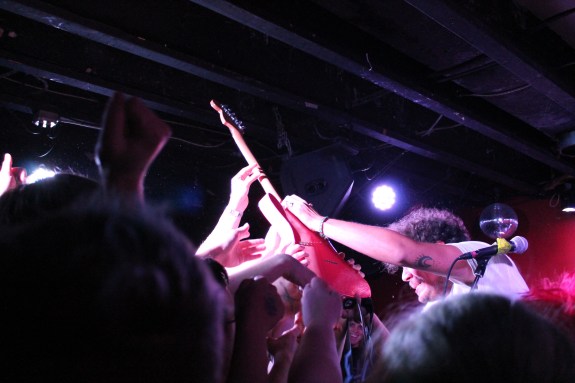 Canker Blossom, a DMV-area three piece, opened things up with lead guitarist Alicia Passmore’s intense stares and impressive vocal range. The bass pounded through the tracks while drummer Jonah Gallagher screamed backup vocals from behind his kit. The band had personality, incorporating their silly spirit into a classic pop punk delivery. With a tempo so fast that Gallagher’s count off could barely fit in, the Baltimore group jammed on, creating a casual environment that carried on through the other three sets.

Meanwhile, concertgoers looked through the merch tables, asking for earplugs bands generously gave out and collecting unique, creative DIY gifts. The band Katie Ellen’s lead vocalist Anika Pyle offered a new idea with a “make your own protest pin” station at the merch table, all of the proceeds of the handmade pins donated to a local charity at each stop of the tour. 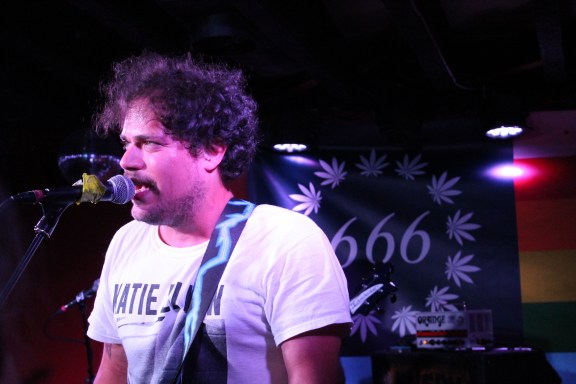 The band came on with a chaotic mix of instrumentation over Pyle’s glowing, melodic voice. The emotion Pyle brought to the space was most spectacular with the song “Sad Girls Club.” She prefaced the track with a considerate and inclusive message to everyone in the room.

They ended their set with a last jam, guitar picks flying, drumsticks forever in motion. Once the band stepped off and the house lights turned on, it was obvious DC9 was packed beyond belief for the sold-out show. Friends kept running into each other, the crowd connected through a love of punk.

San Jose band, Hard Girls, took the stage. Guitarist Mike Huguenor, who later played guitar with Jeff Rosenstock, wore an American flag saying, “I wouldn’t be wearing what I am right now if I didn’t have something to say about it.” All of the bands continued to show compassion in a tense political climate. 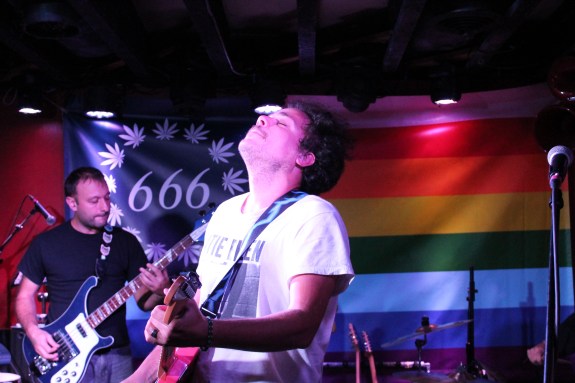 With “Guadalupe on the Banks of the Styx,” fans wooed after each lyric and bassist Morgan Herrell acknowledged those in the crowd that sang along. A wall of cymbal-heavy sound with Huguenor and Herrell’s yelling filled the set, the occasional lo-fi guitar licks barely heard through the rock.

Pyle came back on stage to accompany the band in singing “Mary Anne,” softening things with harmonic tones. They dove straight into a crowd favorite and the moshers came out, DC9’s floor shaking in sync to the rhythm.

Finally, it was time for Jeff Rosenstock to step up onto the brightly lit stage, covering his eyes from the spotlights. He told the crowd that David Combs, also known as the local pop punk musician Spoonboy, was filming a music video at the concert for “Pash Rash” off Worry.

His signature flag hung high and his guitars were covered in protest stickers. “To Be a Ghost…” was first with Rosenstock playing guitar, keys and singing with a full, easygoing voice. After a soft start, the band got heavier with Huguenor on guitar and synth, Kevin Higuchi on drums and John DeDomenici on bass, all playing furiously.

The crowd piled in to be as close to Rosenstock as possible. He seemed happy about the energy but made sure to mention safety concerns and not to mosh in such a packed room. “I’m Serious, I’m Sorry” mirrored the crowd’s energy, as Rosenstock shredded loudly on his guitar and yelled every lyric. All of the fans were right there with him, pointing and singing every single line of songs, even the ones from the new album. 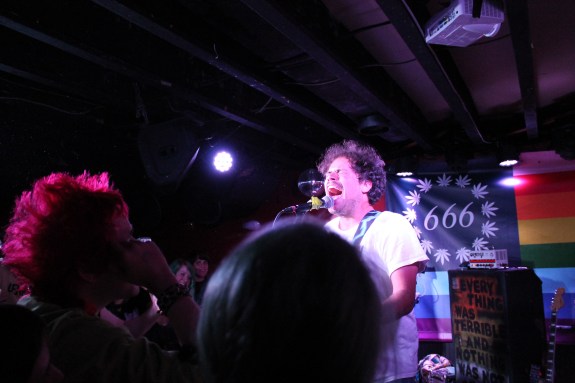 Rosenstock jumped up and down while he played his guitar. He regularly checked in with the crowd, saying “Hello” over and over and providing entertainment in the form of quirky dad jokes while transitioning into other tracks. By the fourth, he was dripping with sweat but the band’s fast tempo delivery continued. “I Did Something Weird Last Night” bounced from an intense and singsong-y track to an ending of Rosenstock’s solo vocals against the audience’s clapping. After the last riff, Rosenstock looked towards the merch table and said hi to his wife.

Throughout the set, drums, bass and cymbals overpowered the tracks, hiding Rosenstock’s vocals and only revealing slivers of the guitar riffs. The crowd kept calling for “one more song,” even though the band was in the middle of their set, jokes continuing and the energy feeding back and forth.

In a mashup of “Nausea” and “Beers Again Alone,” Rosenstock brought out his harmonica, playing it into the pickup of his guitar. The crowd held each other’s shoulders, swaying to the melody. The tune flowed into Rosenstock’s calm intro to “HELLLLHOOOOLE,” which soon turned into a contrasting heavy punk track, in line with the strong instrumentation throughout the set.

The end of the show came and the band brought out a fitting cover of The Equals’ “Police on My Back.” Rosenstock and Combs went on to film some takes with the crowd for the music video. Rosenstock, the legend who lives and breathes music, is going straight onto another tour.