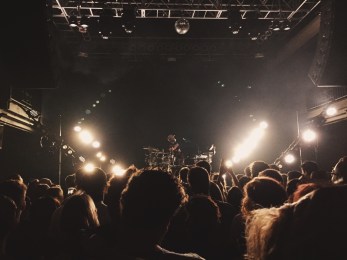 Eager fans of all ages packed the 9:30 Club on Tuesday night to experience the multi-dimensional musician Jack Garratt. Hailing from Buckinghamshire, Garratt grew up tinkering with the piano, drums and guitar. After coming to a realization that teaching was not the path for him, Garratt dropped out of Uni and pursued his childhood dreams. Man, are the people of DC happy he did.

After a short, but energetic trumpet-filled set from the Brooklyn, electro-pop duo Brasstracks, Jack Garratt emerged on stage wearing a self-titled athletic shirt. The crowd was quiet as the lights dimmed and Garratt calmly hit his launchpad to the beat of Syenthesia Pt. III. Once the elision hit the entire crowd jumped on their feet.

Garratt started the set playing his more well-known, electro-pop songs such as Coalesce and Far Cry, which the crowd happily sang and danced along to. As the night went on, Garratt slowly began to showcase his instrumental talent, moving away from the launchpad and traditional electronic music.

An assistant handed Garratt an electric guitar which was incorporated throughout the remainder of the set. By injecting one-handed drum solos that broke his drumstick in two and electric guitar riffs, Garratt completely transformed the catchy, yet generic studio version of Surprise Yourself into an evocative masterpiece, electrifying the crowd.

From then on the concert felt more personal, Garratt joked with the audience by singing Britney Spears’s Oh Baby and the entire theme song to The Fresh Prince of Bel-Air. He shared his loneliness in being away from his fiancé since they got engaged and consequently played a raw, acoustic version of My House Is Your Home. Moving away from the up-tempo, happier tracks, Garratt sang “My strength is something I give to you/And I clothe my fears on the fabric of your dignity,” translating his heartache to the crowd.

What really took the club by surprise was when Garratt announced he is recovering from the flu, which did not render through his powerful voice, especially during the final song. Garratt grabbed the guitar and for the first time moved across the stage away from his setup. Filling his voice with anger and grit Garratt sang his most well-known song, Worry leaving everyone in the audience with goose bumps.

Jack Garratt is not your average electro-pop, mainstream musician. His performance at the 9:30 club shows that Garratt’s musical talent and curiosity in different genres makes him stand out among the crowd of emerging artists. If you have the opportunity, do yourself a favor and Jack Garratt live because he will definitely be performing sold-out shows in the near-future.

Thank you Jack Garratt for an unbelievable performance, I hope to see you in DC again.