Watching Still Corners in DC9’s intimate space on Tuesday night, it was hard to miss the surprising number of local music scene members that were in attendance. As the dream pop band from London played, everyone drifted into a collective dazed mirage. 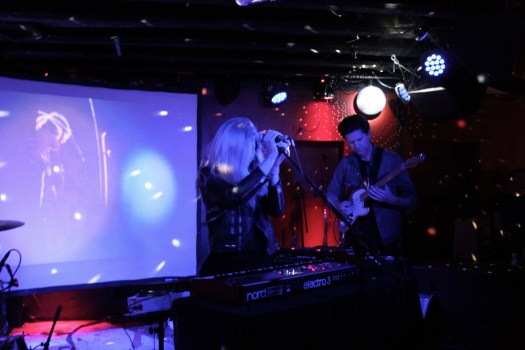 The presence of local bands and people in the DIY scene was mainly due to D.C.’s slow-tempo, dreamy opener, Cigarette. After their mystical, lo-fi performance and a quick set from country artist, Dougie Poole, Still Corners took the stage.

With surrealist video scenes rolling behind them, guitarist Greg Hughes played with vocalist and keyboardist Tessa Murray. A touring drummer vibrated the tiny room with his catchy rhythm. Still Corners mixed songs from their newly released Dead Blue studio album with tracks from previous LPs, back before they ventured into DIY territory and away from well-known Seattle label, Sub Pop. 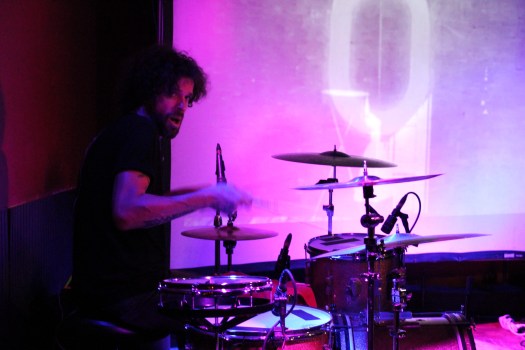 On “Lost Boys,” the single from their new album, the recurrent electronic tones from the guitar intermingled with silky vocals to create a gliding track over the harsh and bare stage. Murray’s delivery was ethereal and mellow but also very strong and formidable, her focused eyes bouncing in and out of illumination under a circling discoball. On the bridge, Hughes threw himself into an intense guitar solo, heavy drums still beating in the background to add to the fury.

Filling the venue with blue light and and 80s pop beats, Still Corners went into their older dream pop tracks. Airy, reverberated vocals and cymbal rolls carried the tune then burst at the bridges, opening for grinding guitar solos. The crowd was quiet and intent, applauding and cheering wildly at the end of songs to make it clear they were still listening.

The last time Still Corners came to town, they opened for a band also from the U.K., Chvrches. On Tuesday though, they headlined the DC9 bill, all while Chvrches coincidentally played down the street at 9:30 Club. 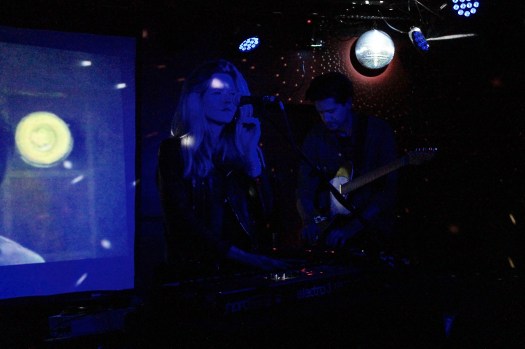 Hughes went into the next track with a palm-muted, minor mode guitar riff. Murray’s haunting voice came in too, with whispering drum brushes, layered as she sang, “I wrote in blood.” On “Endless Summer,” both Murray and Hughes played their respective keyboards then Hughes turned and strummed out a jarring, dissonant solo that trembled until the end.

The audience was shaking and dancing as they played “The Fixer.” A happy chorus emerged from the dark, distorted verses and Hughes played more shrill synth chords. He went into a racing, fanfare-esque riff on guitar for “Bad Country” as Murray created intentional inharmonious tension with her slow and steady mumbles. 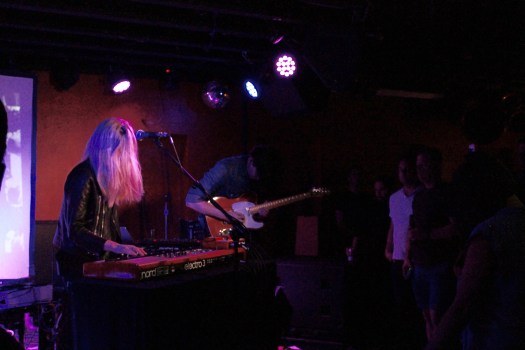 The band ended well with a fan-requested track, “The Trip,” and an encore of “Wish.” For “The Trip,” a high-pitched beat played on under psychedelic guitar melodies as Murray rocked out with her calming deep voice. An astral vibration and fine atmosphere filled the small room and naturally flowed into the night’s most rapid guitar solo yet.

After leaving the stage and being forced back by true fans, Murray said, “We can do more but it’s really quiet and really short.”

Glowing vocals sweeped over slow, glistening guitar as just the duo making up Still Corners left their last impression with the encore. All I can describe it as is coming back home after a chill late night and watching the twinkling lights of the city in the distance.