A stormy night did not stop The Suffers fans from packing into the Rock & Roll Hotel to see the band on Thursday. The Suffers, describing themselves as Gulf Coast soul, brought along a modern, energetic twist on soul, ska and jazz along to deliver the best to a dedicated crowd. 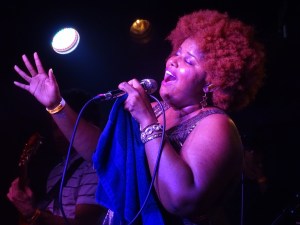 The crowd crushed in closer together, talking and drinking together as if at a tasteful happy hour. UGK and OutKast’s “Int’l Players Anthem (I Choose You)” blasted through the speakers and the crowd dropped their conversations to get into the jam and show off their lyrical recall. The Suffers, who were warming up vocals in the hallway just minutes before, ran up to the front at the sound of the throwback, turning around on stage and putting their fists in the air, much like on the album artwork of their eponymous album released in February.

Jumping straight into “Gwan,” vocalist Kam Franklin danced energetically in her cowboy boots to the beat Jose “Chapy” Luna played on congas. Franklin’s seven bandmates followed her lead as she guided them into the different verses. Trombone, guitar, keys, trumpet, percussion, a drum kit and bass all in sync as the shimmying audience cheered them on.

“Good evening!,” Franklin said after the first song, “I’d love to welcome you to your first Suffers show.”

She told the crowd that if they remembered one thing from the night, it would have to be the name of the band and the city they hail from, Houston. Throughout the night, she made sure the audience did just that, quizzing them frequently. 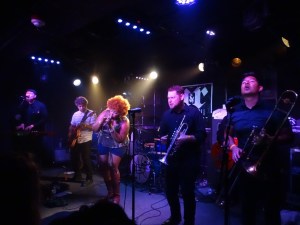 The eight went into a ska-influenced hit, “Good Day.” Franklin shook her hands with emotion as she sang a soulful and animated rendition of the track. She talked to the audience about their gratitude towards the turnout while the beat still rolled, going into an elegant bridge section afterwards. Keyboardist Pat Kelly’s heavy harmony added a full tone to the jam.

“Every time we play [D.C.] there are more and more people,” Franklin said.

The last time they played in the District, The Suffers opened for Lake Street Dive, selling out the show before many fans of the band had time to secure tickets, she explained. Thursday’s show offered another chance for those who missed it to watch the underrated band piece together their unique combination of styles into a blended, fun performance.

The Suffers, embraced by the love of the packed crowd, played their next tune. Franklin’s words were quiet, building drama as she got to the chorus. Her voice exploded, lush chords outstretched, and the crowd clapped to the beat, creating an underlying rhythm and heartbeat.

The band showed even more of their Latin side with the cumbia track, “Baila Esta Cumbia.” Later, “Midtown” turned into a live track mix of soul and jazz culminating in a half-time rhythmic drop. Franklin personalized her performance, making eye contact with each fan and even letting individuals sing a note or two into her mic.

Back to the banter, Franklin asked the audience to look at the people they came with and appreciate them. She referenced the violence and racism currently seen throughout the nation, relating it back to the band’s song “Make Some Room.”

In it also lies the lyrics “Do you want a sandwich? I’ll make one for you.” Franklin assured the crowd this was written for the underappreciated women at home, showing compassion through meals. 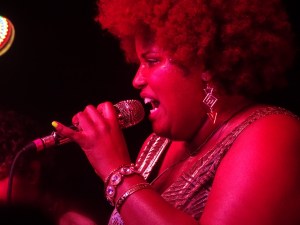 “I’m saying I care about you because food is love,” Franklin said about the lyrics.

Durbin and Razo snapped their fingers and rocked to the beat on “Make Some Room” and the crowd sang every lyric. Even when Franklin delayed some parts for emphasis, the fans carried it on in her space. So, she let them sing, and the voices continued to pair well with humble and strong instrumentation.

“Peanuts” seemed to end the set, but the crowd screamed for an encore. Luna ran back on stage, asking if the audience truly wanted more, and the smiling bandmates followed. A cover of “Sally Brown” by Bad Manners and one last song ended the glowing night.