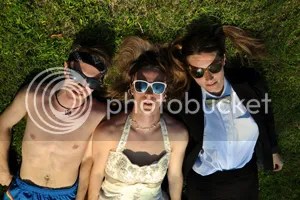 Elliot Greiner: How long have you guys been working on this new EP?

Chelsea: We’ve been writing these songs for a year. We started writing last July, and started recording in April.

Max: We actually just wrapped up the songs a couple weeks ago.

EG: Have you released the name for this new EP yet?

Max: Yeah, you ready for it? It’s Pop Dreams. We don’t have an answer to why we’ve called it Pop Dreams quite yet though do we?

Spencer: Sort of do.

Max: I mean the obvious answer is that dream pop is the genre of the album- but then a good buddy of ours in MH and His Orchestra, he was like “You guys are ‘Pop Dreams’ and we thought it was kinda funny. Then we had this concept for our EP cover- I’ll show you now.

Max pulls out his phone with a picture of the new cover.

Max: Yeah, you’re the first to see it. We really wanted Chelsea’s eye make up to pop out, the make up artist went crazy on us. Do you want to know the track listing?

EG: Yes that would be great.

Max: Okay. The first song is called “Bang”, the second is “Senorita”- which is our Justin Timberlake cover, and then the third song is “One Sweet Thing”, the fourth is “Take Me Up to The Sun”, and the fifth is “Name on It”.

EG: How would you compare Pop Dreams to Send The Night?

Chelsea: We solidified our sound. We were just starting out with our new equipment on the Send The Night EP, and now I think we have final honed in on our sound and figured out how we are going to move forward.

Max: I think we really upped our drum game. In our last EP the backing tracks were sparser, and in this one we’ve kind of filled it out a little more.

EG: When you’re making these albums- and I mean look, you’ve already covered JT- are you more influenced by past or contemporary artists, or is it a mix of both?

Chelsea: It’s a mix of both. I’m really influenced by the eighties and they’re really influence by the seventies as far as past influences go. But we are always hearing new artists that we really love, like recently we found Jungle and we are obsessed with them; Tame Impala is also a great band. Really we are always looking for new artists, and they are always inspiring us just as much as the old songs.

EG: Do all three of you weigh in equally on the song writing?

Max: I’d say yeah we do, we all kind of contribute differently in terms of the writing process and how the song is produced.

Spencer: The key is that all three of us are always involved in the process, and everyone’s input in respected. We all shape the songs.

EG: Do you guys have a tour planned?

Max: Not currently, we are definitely going to play New York. However our first priority is to promote the EP.

Spencer: We’d like to hype it up in D.C.

Max: Yeah, we’re going to do a big cd release show. And for right now we are just really trying to get our music out on YouTube and online and just try to get a buzz going.

More information on the September 29th show and video shoot can be found here: http://www.dcnine.com/event/the-walking-sticks-2/

And for those interested in being a part of the music video, this tutorial will come as a bit of help: https://www.youtube.com/watch?v=4mU0Fev3BhQ&list=UUn5dK9BqMQ6FuW-fZXq-gPw