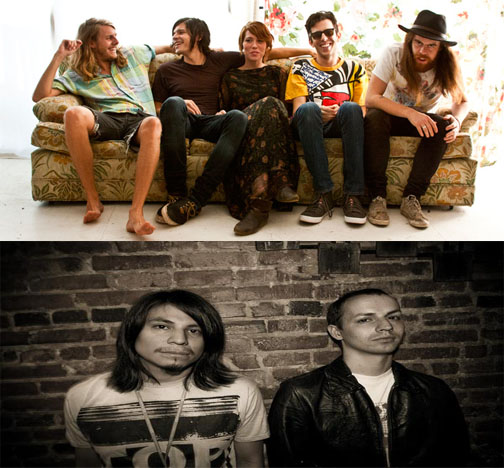 Welcome to the start of the apocalypse, everyone! With only a mere 11 months before the world’s supposed end, it’s imperative you start scouting for exciting, up-and-coming music to incorporate into your “End of the World” playlists. To help, I’ve simplified this task by listing a few personal favorites whom are set to have a great 2012. Disclaimer: you may already recognize some of these bands/genres as they’re not entirely new to the music scene, but they’re still worth listening to nonetheless.

Grouplove – In an October 2011 interview with SPIN, Grouplove frontwoman, Hannah Hooper, candidly expressed, “We dance and move and scream and sing in a day when people are often sitting and typing […] we’re alive.” Such evidence exists in their self-titled EP and debut album Never Trust A Happy Song, both of which feature exuberant, sunny pop-rock songs reminiscent of summer days and youth. Who wouldn’t want to recall such blissful moments while listening to their “End of The World” playlist? Though it remains unknown when the band will be releasing new material, keep them on your radar throughout the year. Between their upcoming tour, appearances on Jimmy Kimmel Live! and Apple commercials featuring their latest single, Tongue Tied, 2012 is set to be a great year for Grouplove. Be sure to catch them at the 9:30 Club supporting Young The Giant this March!

Nadastrom – Considering the explosive success of electronic music last year, I feel it’s only a matter of time before the moombahton sub-genre gains such notoriety as well. More specifically, I suspect Nadastrom, an international DJ act comprised of Dave Nada and Matt Nordstrom, will forge its success. Founded in D.C. by Dave Nada, moombahton combines elements of Dutch house music and reggaeton with serious emphasis on heavy percussions, layered vocals and extended build-ups. Speaking from personal experience at Nadastrom shows, I can attest that this combination of sounds will likely (and by “likely” I mean “definitely”) induce some terrible, embarrassing dancing on your part – perfect for celebrating the possibly impending apocalypse! This year alone, Nadastrom has already performed with the likes of Rusko, Diplo, Steve Aoki and more as part of the Holy Ship! cruise. However, the duo will also be headlining Australia Day 2012’s Courtyard Party with support from Yolanda Be Cool and more. For those interested in attending a local show, check out Nadastrom at U Street Music Hall’s upcoming Moombahton Massive XII on February 15th. They will be headlining with support from Sabo, Heartbreak, Munchi and Jen Lasher.