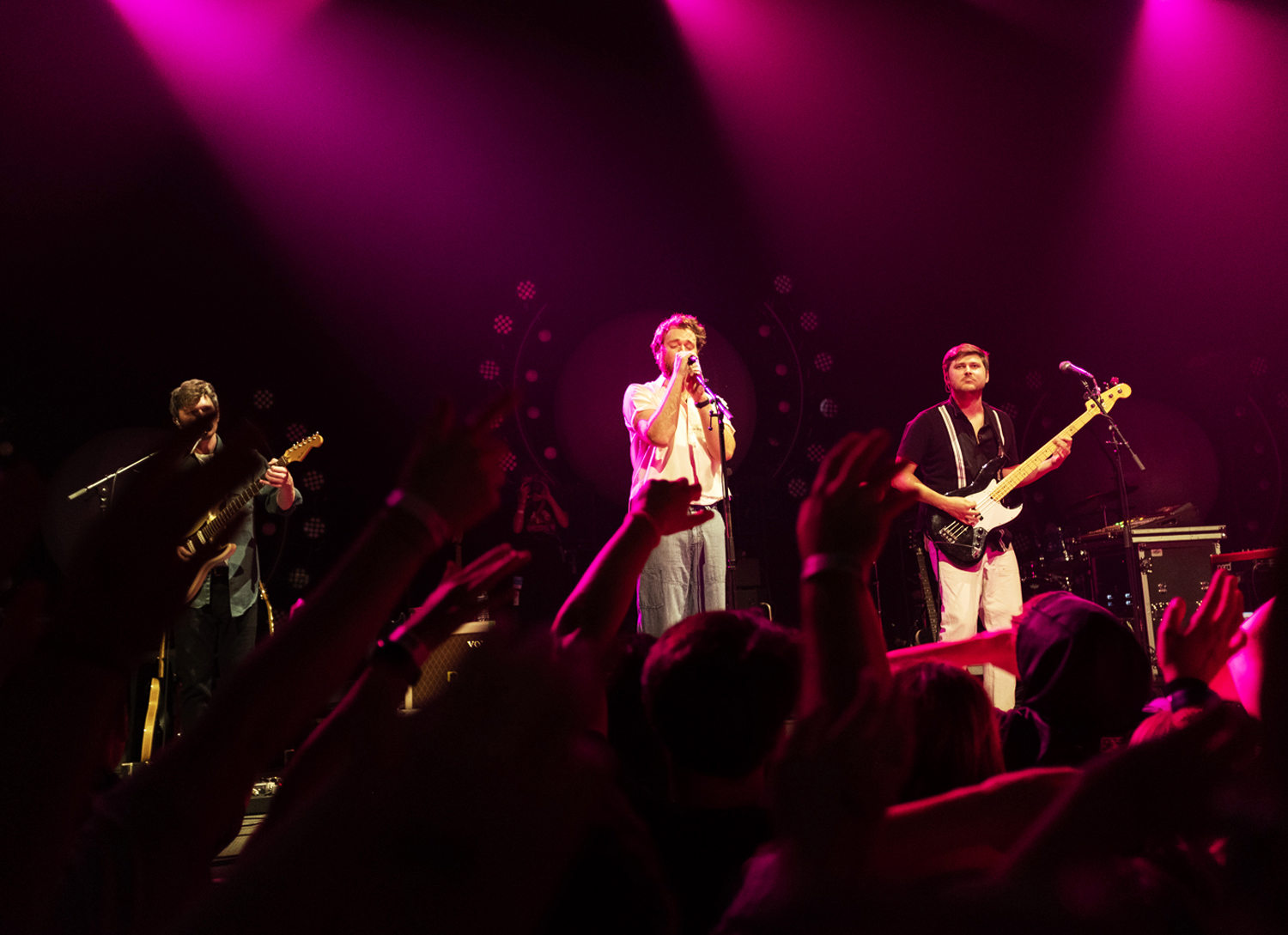 Waiting outside The Wharf on Saturday, October 22, John Canada, the band’s drummer (and accountant!), grabs me and GW photojournalism student (and my roomate!) Isabel Bozarth by the box office and takes us around the back. In a comically complex scene, we are led up several flights of stairs, by many security guards, and through at least half a dozen doors. In the dressing room, singer and rhythm guitarist Joseph Settine is drinking a Yerba Mate while Alec Bolton (lead guitarist), Kevin Canada (keyboardist), and Fred Lankford (bassist) are settling in.

Despite their sold-out shows and being on top charts in the U.S. and Canada, Alabama-based alternative-soul-indie band The Brook & the Bluff still has the kind, Southern comfort attitude they started with. Anyone would say the same for their music despite their evolution through the years, combining soulful tunes with a “gravitational pull,” as they call it.

The band began touring with Mt. Joy earlier this month, and they still feel the pre-show rush, especially at the Anthem venue–which is fully packed with a line down the block. Their show is widely energetic, filled with good vibrations, harmonies, and big smiles. I had the opportunity to speak to the band right after their sound check.

Inshara Ali: I know you started in Alabama and moved to Nashville a few years ago. What was that transition like?

Joseph Settine: It was weird. We moved from Birmingham, our hometown where we all grew up, to Nashville. It was, like, definitely a leap. It was like, if we’re gonna be serious about this thing, we gotta move to Nashville. And we did and it was rocky for the first six months, I would say. Like, I worked 10 hours a day in a garden center, just doing stuff trying to make ends meet. And then we kind of became a wedding band for a little while. But, I mean it was worth it. I feel like at that point in your life, like in your early 20s, just out of college or whatever, you need to challenge yourself to see who you’re going to be as an adult. And I think that was kinda our way of doing it.

John Canada: It kinda felt like we had reached a little bit of a ceiling in Birmingham as far as the music industry goes. And it was only three hours north to Nashville, where you’re surrounded by tons of other musicians like yourself. Managers, agents, the whole industry. So we had more opportunities right off the bat in terms of finding people–we found our producer who we work with now, we found our agent who books our shows, so it just gave us a lot more opportunities.

Alec Bolton: Nashville definitely focused us. Because we were kind of comfortable in Birmingham, like teaching music lessons and making decent money. So we weren’t spending way too much money as a band. And we were like, if we moved to Nashville, we could run out of money really quick and have to move back, which like–we were like delivering groceries for the first six months, basically.

Fred Lankford: It’s funny actually, to convince me to move to Nashville, it was either John or Alec, one of y’all told me we’d be making enough money with weddings to pay for rent. What I didn’t know was that that was all we’d be making.

IA: I love that. So, you all taught music lessons in Birmingham? Tell me about that.

Kevin Canada: Well in college, I did teach lessons for class credit once. Not like everyone else.

JC: So me, Joseph, Alec, and Fred, we all taught music lessons at a company called Mason Music in Birmingham. That was great. And actually, they had this event, their first year of this festival they were starting to put out, it was the Mason Music Fest and we headlined that. So we got to go full circle and that was pretty cool.

IA: Nice. If you could collaborate with anyone, alive or dead, who would you guys choose?

AB: I mean it has to be The Beatles, for me. That’s definitely the default.

FH: I know the rest of the guys wouldn’t do this, but I’d collaborate with System of a Down, in a heartbeat.

AB: It’d probably be different for all of us, honestly. Like some of us would do Van Halen, Tame Impala, or Steely Dan, you know. We just have different influences.

IA: Wow, you guys are giving me a really broad range of answers. What is your songwriting process like with all of your different tastes, is it more collaborative or individual?

JS: So, it kind of goes through processes. The way I used to describe it, I think this works too–is if you look at our band like a book publishing house. So me or Alec will start with a guitar riff or I’ll come with a full thing to Alec and we’ll get past the full draft. Then we’ll take it to the rest of the guys and we’ll work on it from there. If it’s good enough, we’ll take it to our producer and we’ll really build it off there. So it’s a step-by-step process and, along the way, if it gets past all of our different tastes then it’s probably a pretty good song. Because, like, for my collaborator I’d pick Joni Mitchel or John Bryant or Frank Ocean, somebody like more on a songwriter kind of wave.

AB: The beginning-beginning was us two in a bedroom with a loop pedal, a keyboard and two guitars and just seeing what happens. But that was when we were just a duo and now the whole group is writing at this point. There’s really like no one formula, but that’s just how The Brook & The Bluff kind of started.

IA: How did you guys all meet, then?

FL: Oh, boy. It’s a long spiderweb, it’s not like a, you know, straightforward thing.

JC: So, Kevin and I are brothers. And the four of us went to high school together, called Mountain Brook. And Joseph grew up in a part of Birmingham called Bluff Park. So, the Brook, and the Bluff.

JS: Alec and I met in college, freshman year, and played in a different band. Just a cover band, wrote [the song] Straws, then that band just wasn’t serious. So we came back together senior year and started playing again, and got to the end, kind of, and just wanted to take chances in songs. 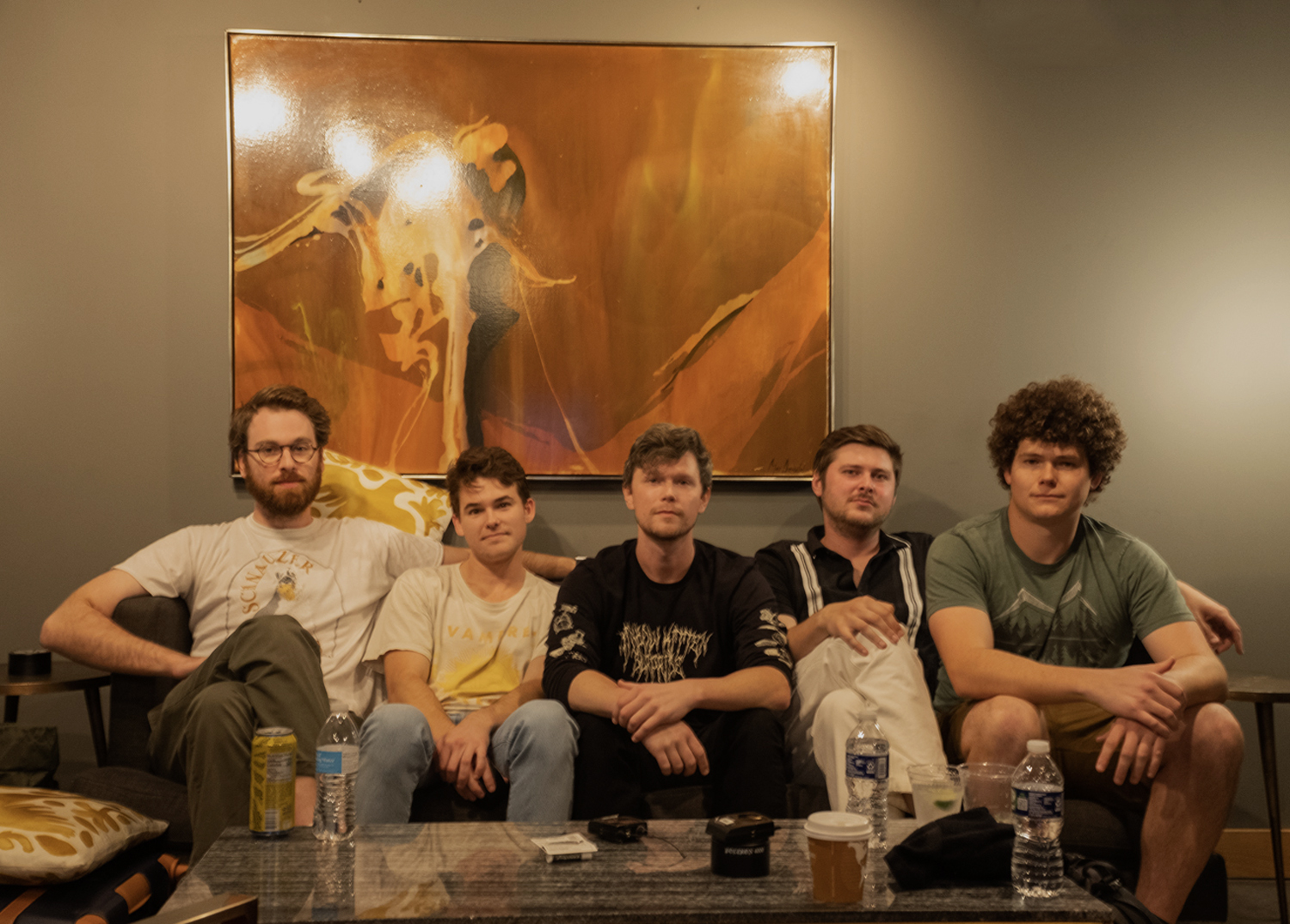 IA: So, 2027, five years from now. Where do you wanna be–stylistically, as a band, as individuals?

FL: As a band, I think we just wanna keep doing what we are doing in terms of releasing music and touring. You know, we hope the tour continues to get bigger, the outreach gets bigger, yeah. Basically, to answer your question, we wanna be doing everything we’re doing now but just more of it. Bigger audiences, bigger crowds, bigger venues.

AB: I think also being able to support families, comfortably, while still doing this

FL: One of us got married recently–Joseph.

JS: Thank you very much, yeah a couple weeks ago.

JC: But yeah, we’re at a point, we’re still in a Sprinter van but the business has built up to a much higher level than it was but we’re still kind of grinding it out in a van. Which is really, really fun–we’ve done it for a while–but it’s probably not sustainable forever, especially when you start having family and stuff.

JS: In that sense, I kind of look up to the group, Mt. Joy, we’re playing with. Headlining groups like this, just having more of a presence throughout the world, as far as the music is concerned too. terms of music. I don’t know. I don’t know where that would go. I think we’ve done a good job of evolving as a band and as long as we have that attitude when we go to make new music, we’ll continue to stay interested in it. Like I definitely do not want to go back to the drawing board and make the same music. And I think as long as that’s the guiding light, we’ll be good.

AB: To be just as excited to write and record five years from now is the goal, I think.

JC: Maybe by that point, doing something that’s fully self-produced too. Something entirely us, you know, could be cool.

IA: I really admire the focus on growth you guys have. After doing this for a little bit now, do you guys still get nervous on stage?

FL: Oh my god. Not every show but like tonight, for instance, with a room this big and the audience that Mt. Joy brings who are really cool and really into them, up the nerves

KC: It’s worse right before you get on stage and then, you start playing, you settle in, you’re good.

AB: It’s just the 15 minutes before getting on. That’s when I get nervous.

JC: You just gotta throw yourself into it, you know.