Anyone familiar with the big music releases of 2013 might have heard of a little French duo named Daft Punk dropping a popular album, Random Access Memories, in the late spring. Fast forward a little bit after that release and another duo by the name of Darkside has taken the entire album, flipped it on its head, and uploaded it to the internet for everyone’s listening pleasure. With this release, Darkside grabbed the attention of music aficionados around the world, myself included. Not too long after their release of a completely remixed RAM, their debut LP, Psychic, was released. That was when I vowed that I had to see this group live.

Imagine this: getting to the 9:30 Club so early that there are only about 30 people present, milling about at various proximities to the stage and on the balcony. There is loud jazz music blaring from the overhead speakers, a surprisingly fitting introduction for the band that is about to take the stage. As more time passes and the opening set performs, the venue fills up  rapidly, with someone next to me announcing that the show had sold out only a few minutes prior. Then, the music goes off, the lights dim and out walk Nicolas Jaar and Dave Harrington, the two gentlemen that make up the experimental rock-infused electronic duo Darkside.

END_OF_DOCUMENT_TOKEN_TO_BE_REPLACED 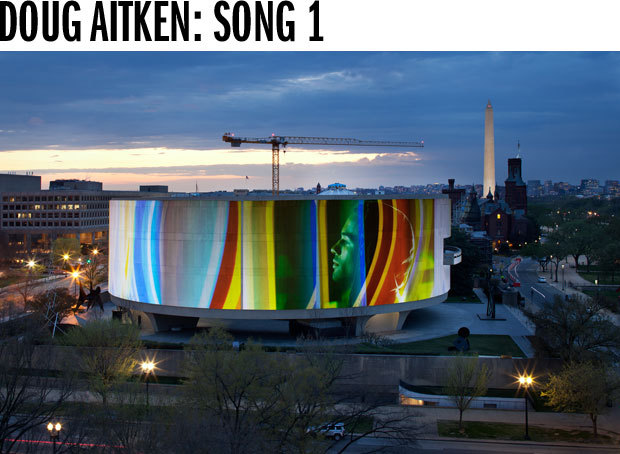 Doug Aitken’s audio/visual integration project, a “360-degree convex-screen cinema” featuring music by Beck, James Murphy (of LCD Soundsystem), Devendra Banhart, Lisa Papineau and many more. At the installation, covers of the pop standard “I Only Have Eyes for You” by these musicians are accompanied by visuals displayed along the sides the museum. Today, the museum announced a concert featuring artists involved in the project on May 11th at the Hirshhorn. So far announced are Nicolas Jaar, Oneohtrix Point Never, No Age, and High Places, but more are to be announced in the coming days (here’s hoping for Beck). Tickets can be bought here.