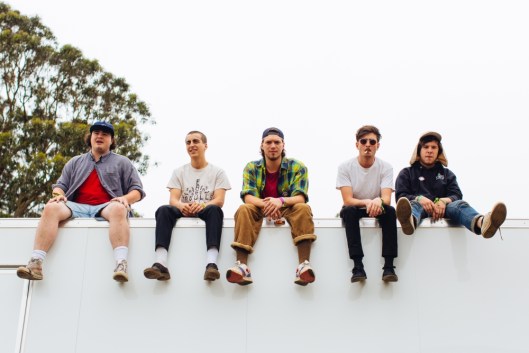 Everyone who is anyone in surf goth was at the 9:30 Club on Wednesday night. The counter-trendy line of young fans noticed as Twin Peaks bassist Jack Dolan slipped past them, sporting his Addison Russell Cubs jersey, a sort of relic of the Chicago DIY scene that raised him.

Even though the mid-week show was headlined by GW’s favorite lo-fi surf rockers, Wavves, Twin Peaks were worthy of the praise they received that night, very well making it a co-headlined gig. When Wavves frontman Nathan Williams and the band finally stepped out on stage, the crowd seemed to grow older, 25-year-old superfans drunkenly pushing their way to the front to have a prime vantage point with crowd surfing access.

END_OF_DOCUMENT_TOKEN_TO_BE_REPLACED

Drake At The Landmark Music Festival. Image Courtesy of Fuse

Despite the medley of differing views the following four of us share about Drake, we could all agree that blowing off the pop star’s Landmark performance seemed like a foolish thing to do. Therefore- to best process our post-drizzy feelings- we’ve outlined our opinions below, hoping to get as close as possible to the bedazzled truth about our 2nd favorite Degrassi Star (J.T remains the greatest, RIP).

Anyone who knows me well enough is quite aware of my feelings towards the 6ix God. I, like many others out there, am a huge Drake fan and treat each new release of his as cause for celebration. (I may or may not have been at a show when IYRTITL dropped, and promptly left the show to go listen to it. It’s that bad.) His music has spoken to me on so many levels, so it’s only natural that I would want to seem him perform live and in the flesh. Luckily, that day came, and I was able to see him in all his glory, only a few short days before my birthday. To say that his performance was life-changing might be a bit of a stretch, but it was honestly one of the best performances I had seen in a long while. Objectively speaking, Drake is a damn good, even great, performer. His set was the perfect mix of hype, drama, and even ended with a rad fireworks display. He managed to play most of the songs I would want to hear, and it was a good mix of older and newer songs from his discography. He seemed genuinely excited to be playing for us in DC, and the crowd seemed equally excited that he was there.

END_OF_DOCUMENT_TOKEN_TO_BE_REPLACED It’s been a while since I’ve been this excited for a show, especially with a lineup this stacked. Thanks to the awesome people behind Closed Sessions, your Wednesday night plans have just been taken care of.

Sweater Beats is bringing his Sweater Weather tour to DC, alongside Kastle and DC’s very own Manilla Killa. Sweater Beats’ music sounds exactly like what his name might imply: super lush and dreamy beats. He’s remixed everyone from Beyoncé to Flume and Chet Faker to Ciara, and put out ton of his own work and mixes.

END_OF_DOCUMENT_TOKEN_TO_BE_REPLACED

Just after sound check at the U St. Music Hall, we caught up with Theophilus London to talk about his new album, Kanye West, his 2011 show next to GW’s campus, Young Thug and much more.

END_OF_DOCUMENT_TOKEN_TO_BE_REPLACED R&B musician JMSN is bringing his experimental, brooding sound to U Street Music Hall this Friday the 13th (spooky, huh?) along with abhi//dijon and Rochelle Jordan.

Don’t be fooled, this isn’t JMSN’s (nom de guerre, Christian Berishaj) first time around the block. He’s made music under other pseudonyms, but has settled upon this name and signature electro-tinged soul music. It’s important to note that these aren’t your mom and dad’s old school bedroom jams; instead, JMSN draws inspiration from 90s R&B and makes it his own, like a breath of fresh air.