BY SARAH SOPHER // Lights was peaking at her latest 930 club performance. On top of the world after publishing her multi-platform project, Skin & Earth, Lights showed DC her strong passion for the story she wrote. Skin & Earth is a comic series that takes place in a post-apocalyptic world, and an album with songs from the perspective of the comic’s main character, Enaia. It has only been a few months since the release of Skin & Earth, and it was fascinating to hear the 930 Club audience being able to sing along to many of her latest songs. Lights shared with us that, to her, S&E is about confronting your inner demon and allowing your challenges to make you stronger. 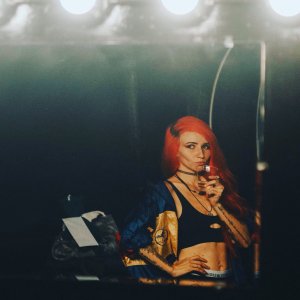 Lights’concert was like a journey through her musical career. Many Lights fans want her to play their favorite song so after hearing a ton of requests being yelled across the venue, Lights made a funny comment. She said “What is this, total request hour? No, I have too many songs for that shit.” She has so many songs, yet she always does a fabulous job of curating her set-list, with tracks that cover a variety of themes and touching on all of her albums. After performing her track, “Moonshine”, Lights disappeared for a few minutes, staff came out to update the set, and the audience filled with suspense. She returned in a new outfit and asked us, “Do you mind if we strip the f*** down and do an acoustic set right now?”

I’ve always wanted to hear an acoustic set by Lights. I’ve seen her 8 times now and this was the first time I’ve heard more than a single acoustic song by her, and it was such a special feeling! As it was her last show this February, the Washington, DC audience was lucky enough to be the final audience this year to hear Lights sing “February Air.” Throwing it back to her first EP and showcasing her soft, yet strong voice made this an intimate moment for Lights’s long-time fans. The other acoustic tracks she played were Cactus In the Valley and Muscle Memory. She brought the pace back up by playing her latest tracks such as “Skydiving”, “Fight Club”, and “Morphine.”  Fans jumped around singing the lyrics to her new tracks with huge grins on their faces. Not only does Lights bring everyone’s favorite albums to the setlist, she also does a great job of setting the mood and helping the audience feel the range of emotions she experiences in her music. She ended the show with two encores, and another intimate moment, asking everyone to pull out their phones and shine a light for her performance of “Almost Had Me.” It was truly a special evening to see Lights so proud of her project, and gracefully performing her fabulous music.