NADA AHMED // The Maine is an alternative rock band from Tempe, Arizona with members John O’Callaghan, Kennedy Brock, Pat Kirch, Garrett Nickelsen, Jared Monaco, Alex Ross, and Ryan Osterman. Their first studio album Can’t Stop Won’t Stop, released nine years ago, consisted of more fun and upbeat songs. Some of their most popular tracks are off this album such as “I Must Be Dreaming” and “Whoever She is”. Since their first, each following album has become increasingly more mature than the last in both theme and sound. Pioneer featured songs such as “My Heroine” and “Misery” while Forever Halloween featured songs like ”Love &Drugs” and “F**cked Up Kids”. 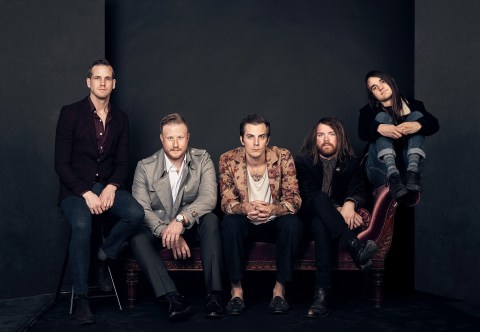 Throughout their last two albums especially, Lovely Little Lonely and American Candy, they have mastered the ability to harness their more powerful vocals and instrumentals until the perfect time in the song where it becomes most meaningful, hard-hitting and effective, rather than remaining consistent throughout the entire song. The songs from Lovely Little Lonely vary in mood like how “I Only Wanna Talk To You” and “Lonely” are extremely emotional while matched with more upbeat songs such as like “Bad Behavior”, demonstrating how The Maine has learned how to create a perfect balance both within the songs and within the album.

I’m excited to see the difference between their performance in Philadelphia for their Forever Halloween album, and the different sound presented in Lovely Little Lonely at the 9:30 Club on May 3rd. They are excellent, passionate, upbeat, and interactive performers, making sure to never bore the audience for a moment.