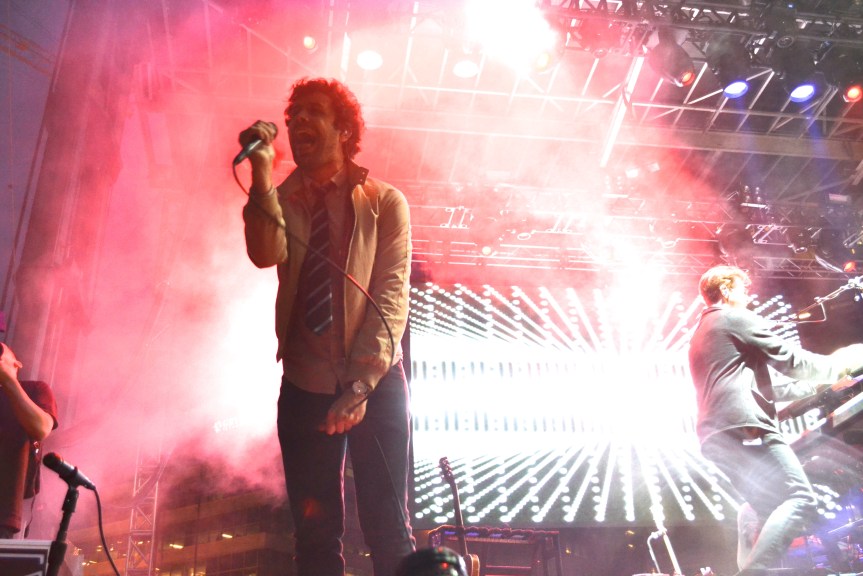 This rainy Saturday, the All Things Go Fall Classic music festival brought together a mix of electropop bands for a muddy dance party. But, some serious sound equipment issues did occur due to the rain.

The annual autumn festival brought bigger name acts with more recognition than any other year to the District. A single-stage, no-frills event placed the focus on music. The only other source of entertainment, besides a great food selection, was a wall with the letters “A.T.G.” that concertgoers could spray paint with shades of green. 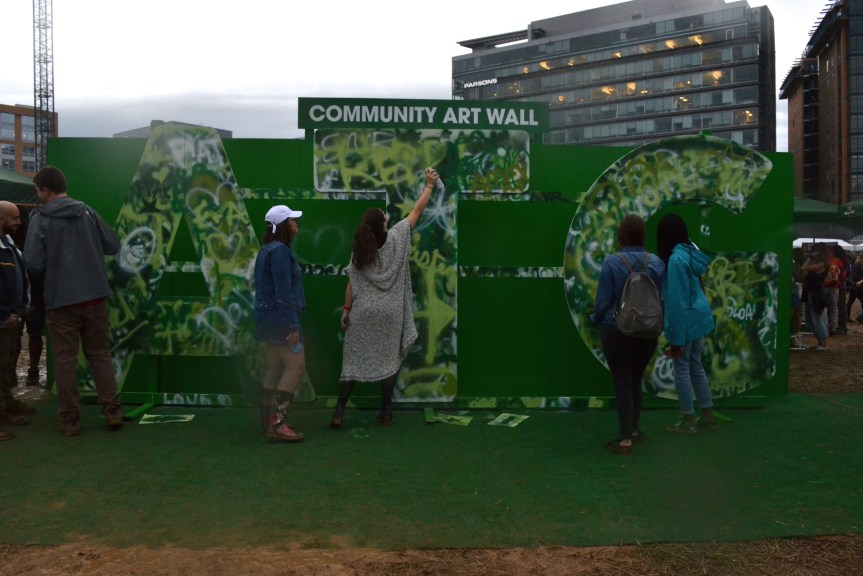 Set right in the middle of the city, the sole stage was surrounded by towering office and residential buildings, offering an interesting background to the performances. With the downpour, the festival started off unconventionally, yet no one present worried about showing off unique outfits or packing in close together to get a good look at their favorite artists. Even with the weather though, the crowd kept moving, dancing from day into night.

By the time mid-afternoon act POP ETC took the stage, the crowd had settled in, wrapped up in their raincoats and enjoying the electrifying sounds that brightened up the dreary weather. On the new track “I Wanted to Change the World But the World Changed Me,” a walking synthesizer line followed each one of Chris Chu’s shouted verses, creating pop bliss. The song, “Excuses,” added to the charm of the performance with golden guitar licks melted together with shaker and keys. 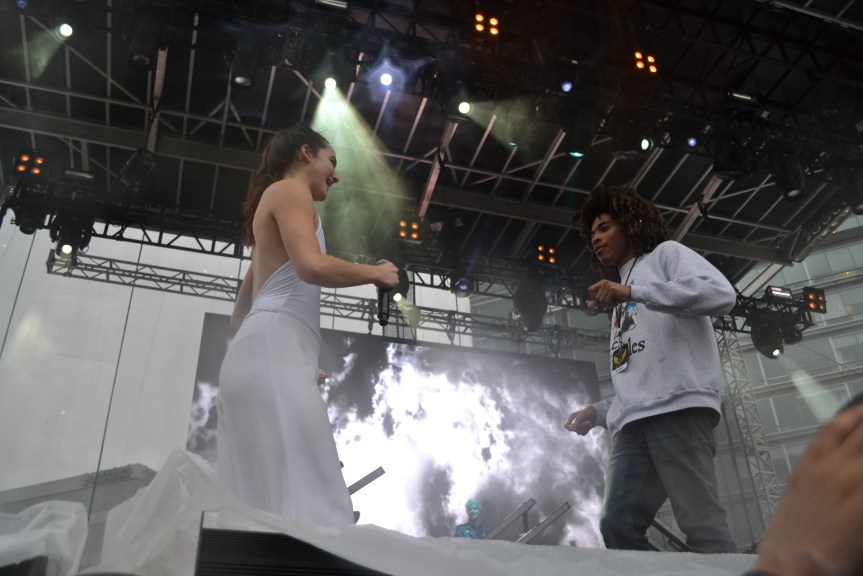 As the performances went on, the large dance party got muddier and muddier. But, that did not stop the crowd’s energy. Bishop Briggs took the stage, which was now filled with wet sound equipment that started to lose quality. She sang with certain emphasis, but every time a synthesizer was struck, a noticeable deafening speaker bass vibration hit the crowd in the chest. It became hard to focus on “Wild Horses,” because of the technical issues. 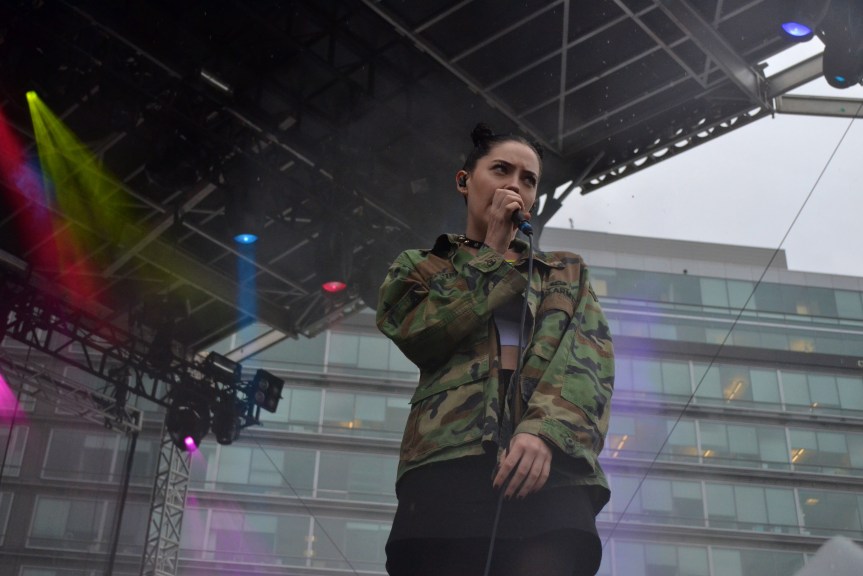 The festival organizers seemed to deviate from the sustainability standard set by other festivals in the area, such as last year’s Landmark Music Festival and the annual Sweetlife Festival. There were no compost bins or water fillers and fountains, plastic cups and beverage cans slowly piling up all over the small portion of the Yards Park lawn that was used for the event.

ATG did have a nice selection of vendors however, chosen with D.C. residents’ favorites in mind to make sure everyone had a hot meal in the misty evening. Timber Pizza made large pizza pies in their mobile wood-fired oven. Takorean served up a sweet but tangy mix of ingredients. But the award went to Milk Cult, which offered tarot card readings with every purchase of ice cream.

Christine and the Queens, who was queued up after Bishop Briggs, decided to cancel after she was told it was not possible to go through her dance routine and have the usual light show.

Sofi Tukker jumped in instead, with Sophie Hawley-Weld and Tucker Halpern dancing and DJing a second set after their performance earlier on the bill. The speaker malfunctioning continued but the duo provided so much entertainment, it was easy to put the issues aside. Halpern chose audience members to dance on-stage with Hawley-Weld, and the selected few showed off their experimental party moves.

Ace Cosgrove came out too, twirling Hawley-Weld and the festival staple of crowd surfing finally began as the rain slowed to a drizzle. The three artists had saved the day. Sylvan Esso came out and got the whole thing on track again. 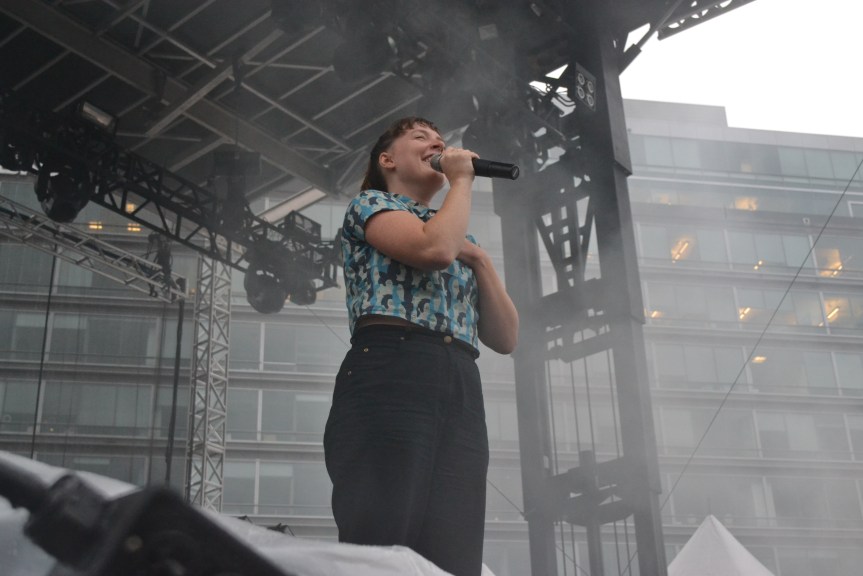 Meath moved around stage, dancing and twitching to the beat in her platform sneakers as the crowd cheered on. With the track “Dreamy Bruises,” the other half of the band, Nick Sanborn, put on heavy electro-instrumentals that synced nicely with Sylvan Esso’s twinkling arrow logo behind him. Meath was astonished by the crowd’s energy despite being soaked and muddy.

The band jumped into their hit “Uncatena,” with heaps of positive feedback from the concertgoers. Dance circles formed down below as Meath harmonized with the dramatic sound from Sanborn’s instrumentals on stage. The duo slipped into a new track and Meath’s high, clear vocals could be heard, even through the broken speakers. “Radio” finished it all out, Meath’s matching her vocal chord changes with the synth.

Ace Cosgrove came on stage again to keep the crowd occupied while they waited for Passion Pit under the cloudy pink sunset. As he rapped, nothing came out of the giant speakers on stage, the audience left looking towards the sound engineers hoping they would notice. At the end of his song, Cosgrove came back on the mic, talking about the election and having everyone chant against a certain candidate.

After the sun set and darkness took over, Michael Angelakos and the band ran up on stage. With guitars, keys, bass and synth in tow along with a drum shield around the kit, it was sure to be a sonically pleasing show. Angelakos started out with an old track, “Little Secrets,” and concertgoers sang along. But, it was obvious something was wrong with the vocals. At “Lifted Up (1985),” the vocals could not be heard at all, the never-ending speaker issue seemingly worse. 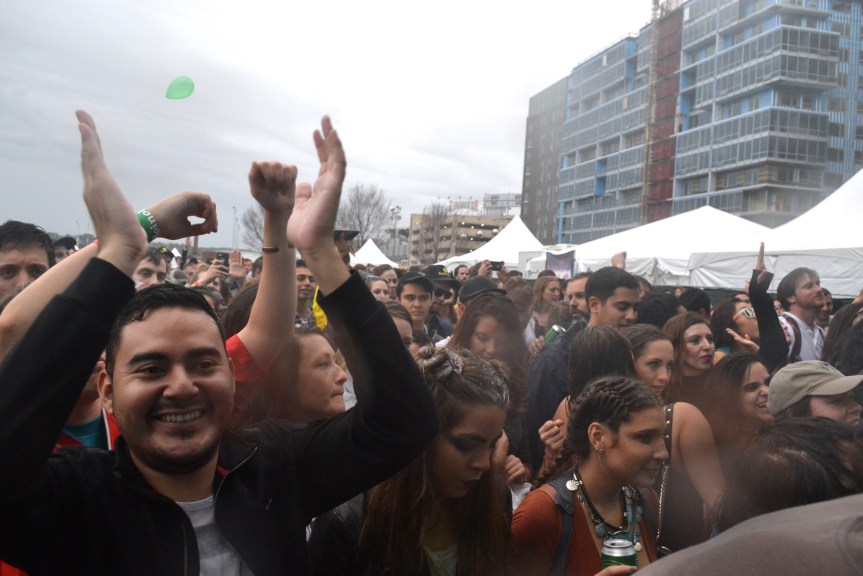 Even so, Angelakos’s energy was apparent in his crazy dance. Towards the end of the fiery electronic performance, the audience put their hands into the air for “Take a Walk,” the hit off Passion Pit’s beloved 2012 album, Gossamer. “Sleepyhead” ended it all, Angelakos jumping around stage until the drummer hit the the last beat.