“You guys are so hyper,” guitarist and singer Emily Kokal told the crowd as they jumped and cheered.

Warpaint, the dream pop band from L.A., played a hazy set at the 9:30 Club on Tuesday night. After an angsty, sinister set from math rock band Facial, Warpaint came in with the trance-inducing beats of the track “Bees.” Blue lights shined on the otherwise dark stage and red fog drifted up from the ground.

The band took their performance seriously, often setting down instruments to sing clear into the mics with emphasis. For “The Stall” off the newest release Heads Up, drummer Stella Mozgawa played a rhythm that was heavy on cymbals while creating more layers with drums on her kit. Kokal’s soft, airy voice whined through as bassist Jenny Lee Lindberg and guitarist Theresa Wayman provided background vocals. 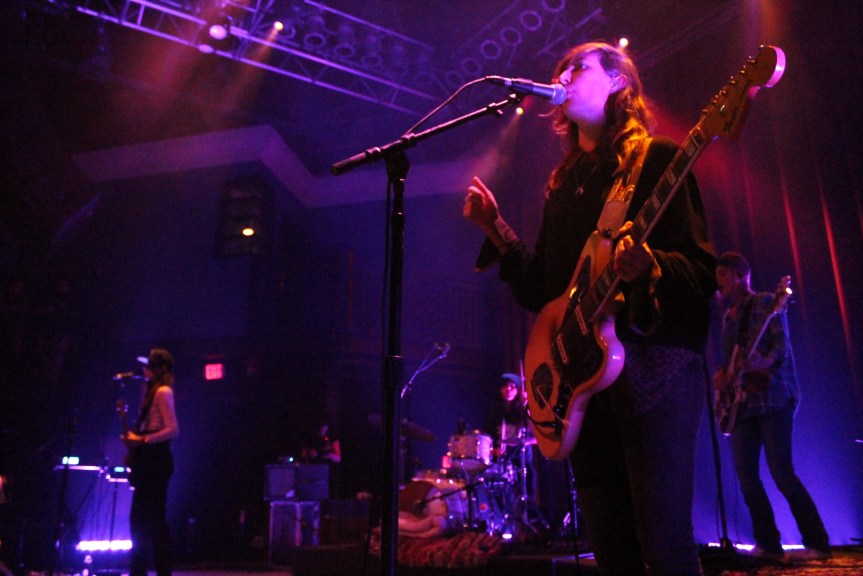 Warpaint played their hit, “Undertow” off 2010 album, The Fool, with both Kokal and Wayman on guitar and vocals, hitting each note together. Lights flashed for the chorus and Kokal, weaving out of her guitar, moved her hand to the reverberation as Wayman cooed. The multifaceted aspect of the song’s rhythm and melody incorporated the distorted instrumentation into a dream-like, powerful chorus that the crowd fed on as they sang every word along with Kokal. Wayman’s hat, with Warpaint’s triangle logo on it, fell off as she sang and danced with the waves of intonation.

Lindberg’s bass set the tone for “Hi,” from the band’s self-titled LP. The crowd, amped up with energy, shook to Mozgawa’s driving rhythm. The bandmates sang in rounds, some holding out notes and jumping octaves while others sang verses and whispered phrases. The echoing vocals added to the band’s psychedelic instrumentation to create a space of detached consciousness. Carrying on with the set, Warpaint jammed to the new track, “Whiteout.” Mozgawa drummed tirelessly and Kokal, only gripping the mic, riffed on this leading beat. Kokal carefully changed the intervals of her voice to the instrumentation.

The band directly went into a version of “Beetles,” quite unlike their 2009 studio track. Wayman sang to Kokal’s fuzzy guitar solo and an 80s drumbeat. The 7-minute song took a slow twist in the middle, each verse leading to a chorus of heavy instrumentals without no vocalization. Wayman came back with her part and the beat continued to roll out into the end.

After playing a lighter and happier version of “Love Is to Die,” and performing the synth-heavy, videogame-like track, “New Song,” Lindberg slide the chords of her bass to start off “Disco//Very.” The venue turned on the historic disco ball for the grimey dance song. Kokal’s vocal performance had an evil, dark feel to it and pulsed with the murmuring of Wayman and Lindberg.

The group ran off stage but was quickly called back for an unheard of five-song encore. Dense drum rhythms, pounding guitar and harsher melodies characterized the last few pieces of Warpaint’s set. The band delivered, as they did all night, a full and rich sound that was tastefully satisfying in a well-orchestrated performance.