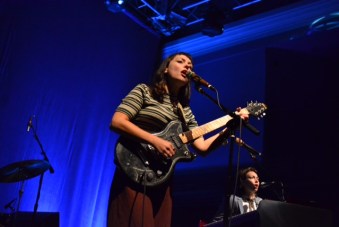 The lights went out signaling the start of the show and everyone cheered for a few seconds then went silent. The distant hum of Angel Olsen’s first single off the new album, MY WOMAN, could barely be made out through the speakers. The chilling scene lasted a minute or two then Olsen and the gray suit-clad band ran out.

The audience was overjoyed. They had to sit through a performance by David Bowie wannabe, Alex Cameron, before the entrance of beloved Olsen. The Sydneysider with his bandmate, saxophonist Roy Molloy, played along to pre-recorded synth beat tracks and cracked jokes that were written for the wrong crowd.

Cameron’s set started with a corny thunder track playing from his computer. He danced in a silver velvet suit with hair slicked back, posing and directing his hands to the sky. Molloy, looking as unamused as the audience, seemed to roll his eyes and tapped on his alto saxophone as Cameron sang towards the heavens. Molloy had his quirks too, ditching the idea Cameron told the audience about, of a sober “pure, mature tour,” for beer Molloy had to borrow an audience member’s bottle opener to enjoy. The saxophone solos echoed from the reverb on his mic but they pleased the crowd nonetheless with a walk through of octaves and a soft stream of notes.

After Cameron’s laughable performance, Olsen brought back the familiar with her raw, catchy vocals on the first song, “Never Be Mine.” Her forceful cooing led the band and her fingers strummed an impressive 12-string guitar while her clogs tapped out a slow, relaxed beat that defined the tune.

Immediately after playing the song from the new album, released earlier this month, she picked up her 6-string for “Hi-Five” from her second LP, Burn Your Fire for No Witness. The audience sang along to the older track. Olsen showed off her distinct old-timey bellowing before going into the heavy rock bridge with bassist Emily Elhaj and drummer Joshua Jaeger.

The set just kept getting better and better, each song transformed into its own artistic concept with life off the studio track. During one of the singles off MY WOMAN, “Shut Up Kiss Me,” Olsen and backup vocalist Heather McEntire (Mount Moriah) sang while dramatically fading their vocals into a quick drum beat at the end of each lyric. They sharply screamed, “I’m still young,” before going into a rollercoaster of vocalizations over the slide guitar tune Paul Sukeena slammed down.

A “marry me” came from the audience and she responded, “Yeah, let’s all get married right here.”

A blend of Sukeena’s lap steel chords and Olsen’s mumbling matched the natural rhythm of the song as they went into “Lights Out.” Luke Norton, on electric guitar, built up the melody further with his sunny riffs. The song was slower than the studio version, drum fills taking time and swinging to the beat.

The band did not shy away from longer songs. “Heart Shaped Face” was next followed by the 8-minute long ballad “Sister.” As she played, Olsen starred into a corner of the venue for a while then softly smiled. The song was a great example of Olsen’s multi-layered instrumentals, all six band members playing a different melody or rhythm in harmony. Norton’s chord progression at the end guided them all into a huge mass of concurrent riffs, Olsen and McEntire projecting over the noise and dragging out their notes.

Olsen held both mystery and power, always in control of the performance. Her take on every tune had elements of jazz, folk, rock and pop that fit spectacularly together. The band played an old one, “Acrobat” of Half Way Home. Ghostly, fragile and innocent the song paired Norton’s minor key solo with the light happiness of the keyboard chords McEntire streamed from her fingertips. 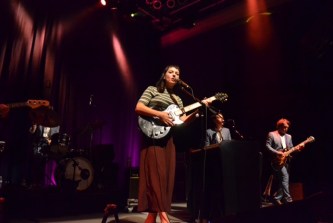 Olsen ended with a solemn lyric, “I thought that I died,” going straight into “Windows” off the second album. The band’s instrumentation mirrored something like Radiohead’s omnipresent electronic void. Olsen walked out as the band continued to jam on “Give It Up,” but the crowd called her and, eventually, them all back in for an encore.

Olsen and Jaeger came out to play keys and Sukeena followed on guitar. Falsetto mixed with a synthesizer that could do no wrong and left the crowd speechless for the song “Intern.” The rest of the band members came out for “Woman,” the finale of the set.

All around, the concert was stunning. Olsen and the band put so much energy and creativity into the performance. Standing in 9:30 Club, watching the set go by, it felt like each person in the crowd was stepping into a music festival on a desert night. There was eternal silence that allowed for captivation and deliberation on each element of the music. But, the performance also held such passion that not one listener could stand still.