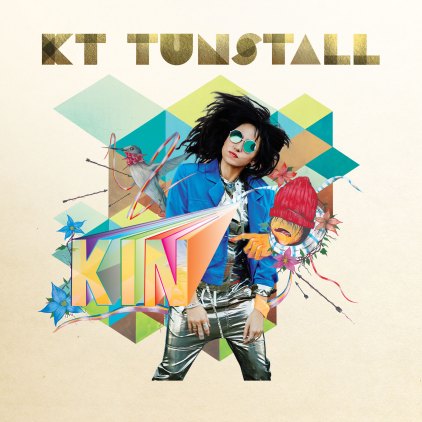 It has been 12 years since KT Tunstall released her hit single, “Black Horse and the Cherry Tree.” The bluesy and folksy hit, which employed one of Bo Diddley’s famous beats with a wild spiritedness to it, skyrocketed the Scottish singer to the top of the charts. She earned the no. 15 spot in US Billboard Pop Songs, and a no. 1 spot in the US Billboard Adult Pop Songs category.

Tunstall is now a critically acclaimed singer, winning in best track at the 2005 Q Magazine awards, and in best British female artist at the 2006 Brit Awards, in addition to nominations for the 2005 Mercury Music Prize, the 2007 Grammy and Brit Awards. Between 2007 and 2013 Tunstall released successful studio albums, and toured around the world.

However fast forward to today, and nobody seems to have a clue where the spirited and successful indie rocker went. Everyone comes and goes, or at least takes a break. KT came, went (for some fresh air) for a little while, and is now back in business with her brand new studio album, “KIN,” released this past Friday, September 9th. The album is her first in three years, and its got some bite in comparison with her softer 2013 album “Invisible Empire // Crescent Moon.” The album drifts between moments of decisive rock and experimental melodies, giving fans a well-rounded refresher of Tunstall’s sound. Even the album’s artwork is an energetic arrangement of vibrant colors, a funky and edgy break from her previous album artwork.

The album and this tour, being kicked off at the Lincoln Theatre this upcoming Wednesday, September 14th, carry a new energy to them, emblematic of the next chapter of Tunstall’s musical career, sparked by the artist’s well-deserved year of rest and retreat. Tunstall’s refurbished sound is more refined, with an added dimension that can only come with 20+ years of musical experience. With songs like “Two Way” featuring James Bay, “Evil Eye,” “Run On Home,” and “Turned A Light On,” Tunstall shows us that she didn’t come back just to say hi. She came back to give you a delightful musical experience, or in other words, rock your face off.

You may not have heard Tunstall in a few years, but she and her new album are not to be underestimated. Tunstall is ready to take her music to the next level, and her newest album is definitely going in the right track. Wednesday’s show will not only be the icing on the cake, but also the start of an impressive tour and the second chapter of Tunstall’s career. I’m not a devoted fan, but Tunstall’s new album and renewed vigor have me hooked already. It is safe to say that her show will not disappoint.