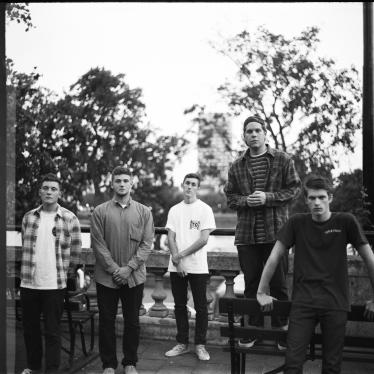 Following a short hiatus, the U.K. band Basement released a new LP, Promise Everything. On Wednesday, they played Rock & Roll Hotel as part of the American tour supporting the release.

Ovlov kicked off the night with bummer rock raging with ringing power chords and jarring pauses. The Connecticut band of self-conscious rockers brought out their potent solos, buzzing through the speakers, for the crowd of head nodders. The tracks they performed had a slow tempo about them that made the ballads more dramatic.

Eskimeaux went up to the center for the next set. Gabrielle Smith’s delicate but well-carried vocals started out the title track from their new mini-album, Year of the Rabbit. Oliver Kalb, representing the band’s label with his Double Double Whammy shirt, played harmonic vibrations on keyboard. Felix Walworth pounded along to the track on the drum kit, sticks flying into the air, a fast-paced change from Ovlov’s performance.

Smith sang the synth track “Folly” in a little dissimilar way from the studio version with fuller instrumentals from both bassist Jack Greenleaf and Smith’s guitar, causing the main focus to be off the vocals. Smith loved the sound, gushing to the audience, “Sorry, I’m just in a wildly good mood.”

The radiating pulse of her guitar led into “The Thunder Answered Back,” each bandmate concentrating intently on their respective acts. Even Kalb turned the knobs on his synthesizer with a spiritual magnitude. The band decided to play a never-before-heard track because, as Smith said, “We’re at the Rock & Roll Hotel!” The chorus was soft with catchy beats, much like Smith’s friend and collaborator, Greta Kline’s (Frankie Cosmos) music tends to be. Walworth’s heavy drumming turned the piece into a more unique and defined song, built up with undertones from all four instruments.

As the set went on, even those who seemed like suave Basement fans took to swaying along. A well-known, bolo tie-wearing music critic was spotted bopping along in the crowd, in a way approving concertgoers’ decision to forgo the spectacular performance occurring across town at the 9:30 Club for Eskimeaux’s intimate show.

Although their album is toned down and smoothly mastered, Basement’s live show was a dark, energetic beast to be witnessed. The headlining band took the stage and a massive amount of fans rolled into the front, close enough for the impending mosh pit action. Andrew Fisher’s smooth voice came in distant, guitar warbling over the vocals.

As the large following began to thrash around on the venue floor, the band played a heavy version of “Whole,” angsty lyrics accompanied by blustery chords. Fisher, grasping only the mic, moved around powerfully while performing the next track “Aquasun.” The shouted and pleading vocal bridge caught the attention of the listeners who punched their fists in the air along to the words. While the songs were put on with vigor, the guitarists Ronan Crix and Alex Henery stayed on lo-fi, monotone riffs, which only added to the loud vibrating jumble of noise.

Time lost itself inside of the venue. Fisher’s face was forever shadowed by blue lighting as the dark oblivion went on into 10 p.m. Each song title was announced before being played, but that may not have been necessary as most audience members sang along to every familiar lyric, even ones from the newest album.

Basement went into “Oversized,” one of the few soft and calm tracks on the new album, fans singing with Fisher during the chorus and waving their arms back and forth. The next song, “Yoke,” very abruptly and immediately followed, gaining the status of the heaviest track performed that night.

“Covet,” the last song of the set with a minor key bridge and resolution, left a nice aftertaste to the hardcore performance.