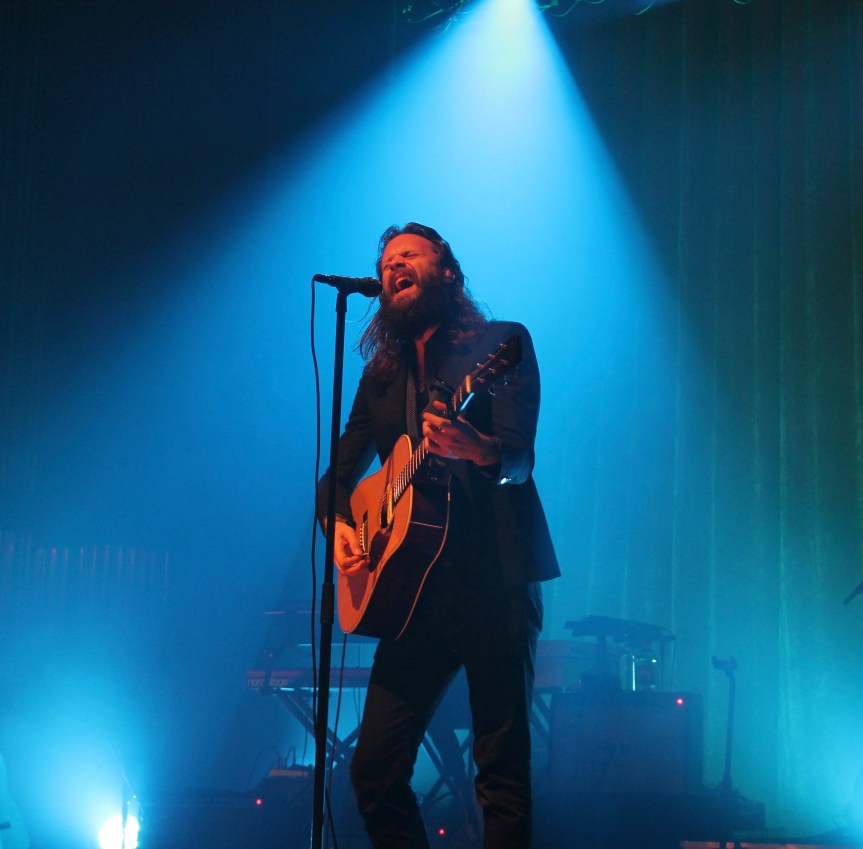 Father John Misty, also known as Josh Tillman, sold out two shows at the Lincoln Theatre on Monday and Tuesday. After feeling so ill during his set on the first night that he had to stop for one of his rare but coveted Q&A concert sessions, Tillman brought back the normal set list for the second night.

In the floral wallpapered theater with elegant gold embellishment, Tess & Dave warmed up the crowd with a giddy, choreographed performance. Tillman came on stage next, greeted by the audience getting up out of their seats to welcome the mythical rockstar.

With Tess on keys and Dave on pedal steel, Tillman and the rest of the band played the psychedelic, Americana track, “Tee Pees 1-12.” Tillman swayed lazily to the pedal steel harmonies, keeping time with his lanky dance. 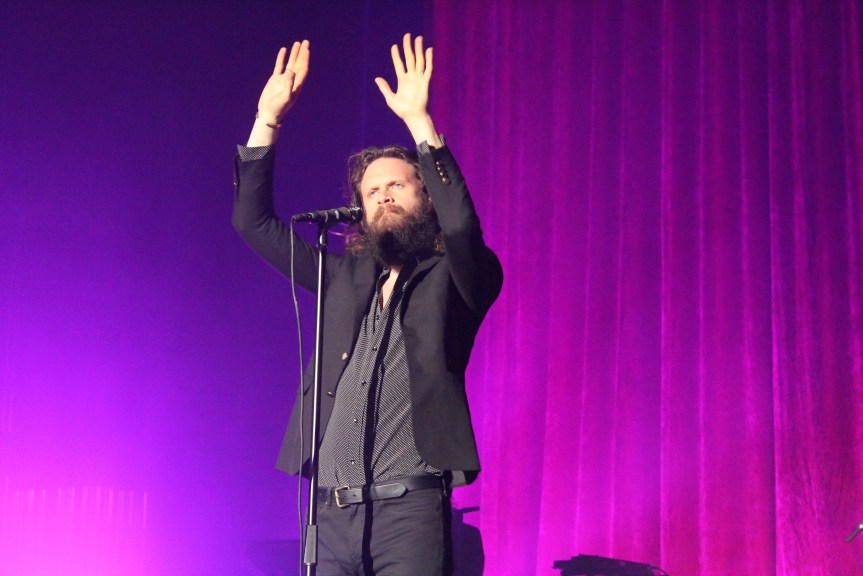 His dancing took a wild, and really impressive, turn with “Nothing Good Ever Happens at the Goddamn Thirsty Crow.” Towards the end of the song, Tillman took the emotion to the next level, throwing his acoustic guitar to a roadie and belting out the ballad on his knees. The drummer brought out a shaker for the following track and lined up his kick drum beats with the revolving lights, as Tillman sang the mariachi-influenced “Chateau Lobby #4 (in C for Two Virgins).”

Throughout the set, Tillman seemed to speed through the songs, foregoing banter for elaborate bowing to the crowd and the occasional eye contact. His body dropped with the beat and he brought out an electric guitar for a foggy red rendition of “Hollywood Forever Cemetery Sings.” But with his playacting moves, like rubbing his head and eyes in “Now I’m Learning to Love the War” and stumbling across stage, it was easy to feel that Tillman was just going through the motions and not earnest in his presentation. With a semi-satirical music style, it seems his struggle for authentic performance is something he is very self-aware of. 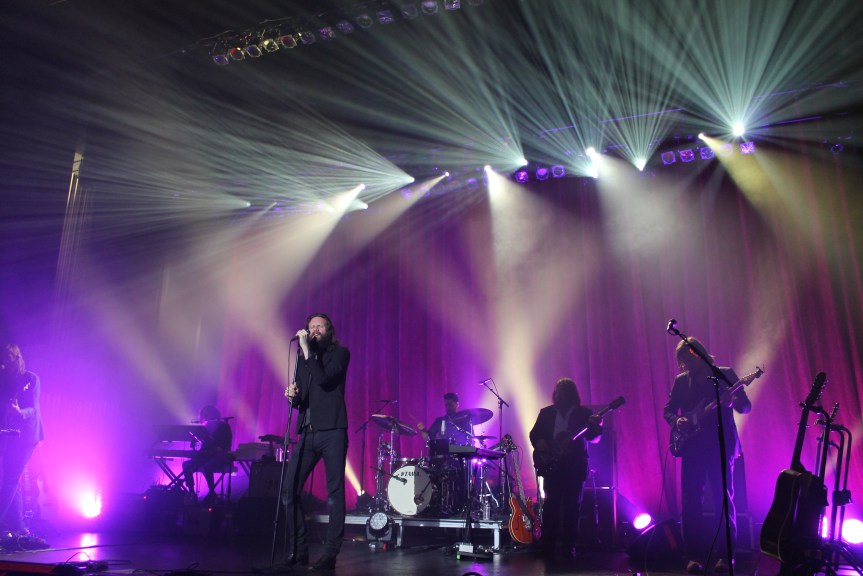 Hope came with “Bored in the USA,” just Tillman and the main keyboardist giving a dramatic, sullen and witty performance of the track. The crowd sang along as Tillman reached out to the spotlight, calling out to a savior. Collective laughter spewed out at the right moments, and as the song came to an end Tillman said, “That’s a particularly tender and vulnerable rendition thanks to the flu.”

Despite his sickness, Tillman decided not to cancel the two shows. “It’s America, you know. You’ve got to go to work,” said Tillman. The two jumped into another track, the rest of the band coming back at the middle of “Holy Shit,” a vamp on cacophonous chords building up the energy. Tillman rushed back to jump up onto the bass drum before falling to the floor dancing. He finished the song out with clean bellow for the crowd.

A fun, disco version of “True Affection” solidified what seemed like Tillman’s renewed energy. A little later, with the title track of I Love You, Honeybear, Tillman nonchalantly motioned for the crowd to give him more noise. The crowd fervently followed his command and put their hands in the air, cheering. After some hip thrusting and great dance moves, the band took a break. 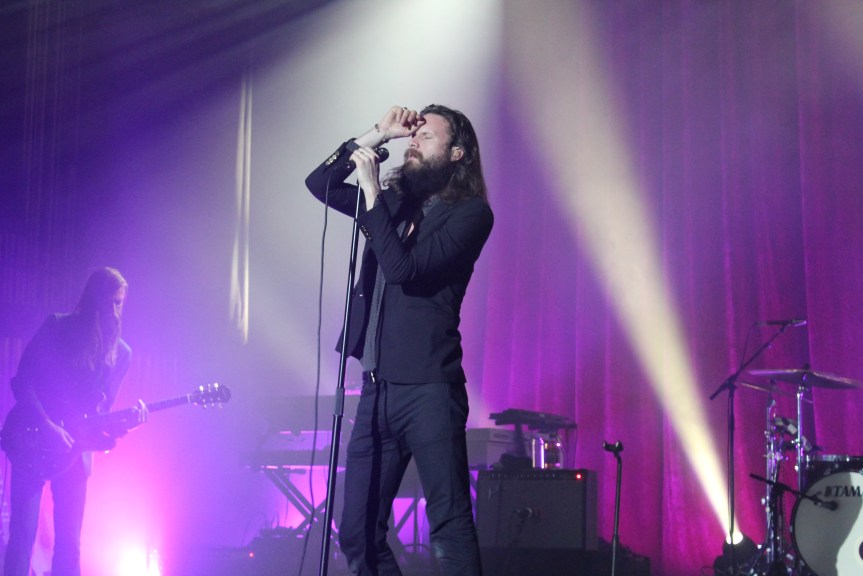 During the encore, Tillman settled into the toned down track “I Went to the Store One Day.” When he reached the third verse, he replaced “I’ve got some money left” with “I’ve got some Beyoncé money,” making a reference to his involvement in Lemonade.

He followed it up with his “favorite love song.” The band started into the groovy riff of Nine Inch Nails hit, “Closer,” with faint, emotionless “help me” background vocals and chord progressions from the keyboards. After “The Ideal Husband,” Tillman left the stage, “Legend” by Drake playing over the speakers.