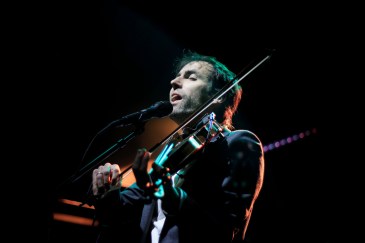 Andrew Bird stopped by the 9:30 Club on Tuesday following last week’s release of Are You Serious. The first original and conventional full-length since Hands of Glory, the newest addition to Bird’s extensive discography is much more intimate and frank than in the past. The show also had a cause behind it, $1 from every ticket sold going to the Everytown for Gun Safety Support Fund.

Boogarins, a Brazilian four-piece with psychedelic and jazz-influenced offerings, opened the night with tracks from their newest album, Manual ou Guia Livre de Dissolução dos Sonhos. A mix between Pink Floyd, Tame Impala and darker post-punk, Boogarins were a great choice of talent -and grove for Bird’s audience. “Tempo,” a song that drew in the crowd’s interest with dramatic pauses, showed off the four musicians’ improvisational nature, defining the modern jam band. Beachy guitar licks, swinging ethereal drums and a patient bass showered the venue with good vibes that carried over into Bird’s set. 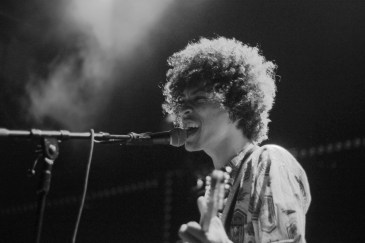 Bird and the band came on stage, toyed around with the intro to the first track, and then jumped right into the reincarnated song, “Capsized.” Red, boxed borders of lights flashed behind them as Bird plucked his violin with closed eyes. His vocals were very careful and every entrance to the tune deliberately thought out.

Rhythmic guitar supplemented the joyous violin bit of “Tenuousness” and the drummer’s creative tapping of drumsticks together and on sides of the kit. The band drank out of their brightly colored reusable water bottles while Bird turned to the audience. 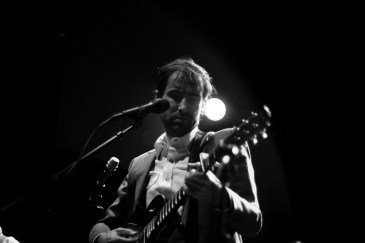 “Hello, friends. Good to see you,” Bird said. He whistled his way through “Lusitania,” playing guitar riffs slow but intricate enough to be engaging. When the title track of the new LP came around, Bird’s finger-plucking solo became a raspy and staccato surprise to the upfront, storyline-like lyrics. Bird ended the band’s jam with the riff he brought out in the beginning vamp of “Are You Serious,” adding a cyclical aspect to the thoughtfully constructed live performance.

Every band member had a defined presence, not simply taking the backseat to Bird’s performance. On the song “Puma,” Bird brought his delicateness to a louder level with a much more rock ‘n’ roll track. The bassist and guitarist played as feverishly as Bird on the chorus sections and the drummer transitioned from cymbal tapping to pace-altering thumping. The crowd moved constantly with each beat, respecting and expressing the instrumentation.

“Fiona couldn’t make it out tonight,” Bird said, informing the crowd that he would perform the duet track “Left Handed Kisses,” originally recorded with musician Fiona Apple, alone. He promised a sort of theatrical blocking, switching the sides he was standing on based on who sang each lyric, the colors on stage fading softly into new hues with each line. As Bird sang with a sonorous voice, it was clear the song was equally as powerful performed as a solo ballad. The last bit of the song built up to a violin and drum piece so furious that Bird’s fallen violin bow strands shook in all directions. 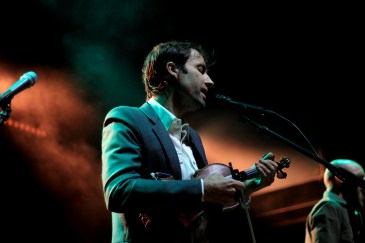 The concert finished out with Bird’s manifestation of passion and musical talent coming through in his movement as he rocked the microphone stand emotionally while he sang. He and the band crafted each song to make it lively, especially with entire verses of cadenced whistling. After putting the loops away for Things Are Really Great Here, Sort Of…, it was nice that he brought them back for tracks on the new release. Those performances still did not reach the level of “Imitosis,” a crowd favorite, with three loops of violin lines and Bird’s guitar and xylophone topping it off. For “Plasticities,” the disco ball came on and lit the room.

“I know we played all these new songs and you were right there with us,” said Bird, thanking the crowd. His nostalgic voice made the tunes familiar, particularly when paired with the unique inharmonious violin sounds he is known for. Performing as if back in the Hands of Glory days, Bird finished out the set in an encore with the band around one microphone. The audience sang choruses of “Give It Away” and “Armchairs” along with the band as the night ended.