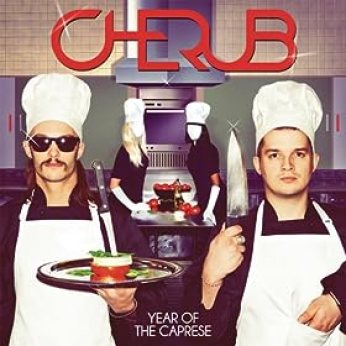 If you can imagine what the hybrid of 80’s pop and the setlist from your favorite urban dance club would sound like, you can imagine how Cherub’s latest release, Year of the Caprese, sounds. The duo, comprised of Jordan Kelley and Jason Huber, aimed to give fans what they perceive as the best of both musical worlds. However, being an enthusiast of either of the two aforementioned genres may provide a better context for appreciating Year of the Caprese.

What’s immediately impressive about this album is that each song seems to have been carefully ordered to maximize the listening pleasure of anyone who plays this album start to finish interrupted. The balance between the two slightly opposing genres can sometimes seem tacky and sharp, but when the balance is right, there is no denying the eargasm that ensues. The transition from Simple, the opening track, into Disco Sh*t is typical of how a seasoned DJ may rally a tiring audience. The song then unexpectedly launches into a tune that probably just missed the cut from Michael Jackson’s Thriller. The consistent synthesizer beat carries throughout the entirety of the album with little variations in tempo, which does start to feel dull.

Year of the Caprese is unique in how it blends- or rather fails to blend- the melodic components of two different genres; though one area where the album is fairly consistent is in the content of its lyrics. On almost all of the tracks, the lyrics read like a textbook on how to abuse various substances. If this isn’t the case, the lyrics can also be too NSFW for your parents, who may be initially drawn in by the 80’s disco vibe given off by these same songs. One example of this is on the track “Strip to This,” where the chorus is comprised of “Watch my money go up & down, pick it up/ Is this LOVE? Or I am drunk?/ It’s the only night I’m in town, then I’m gone/ This is lust, I wanna f-.” Does this kind of songwriting abandon some of Cherub’s fans? Or does it just allow a specific subset of ravers who subsquently enjoy disco music to be completely fulfilled? Regardless of the answer, Cherub is breaking new ground in whatever scene they consider themselves a part of, which is setting the bar high for what they decide to release next.