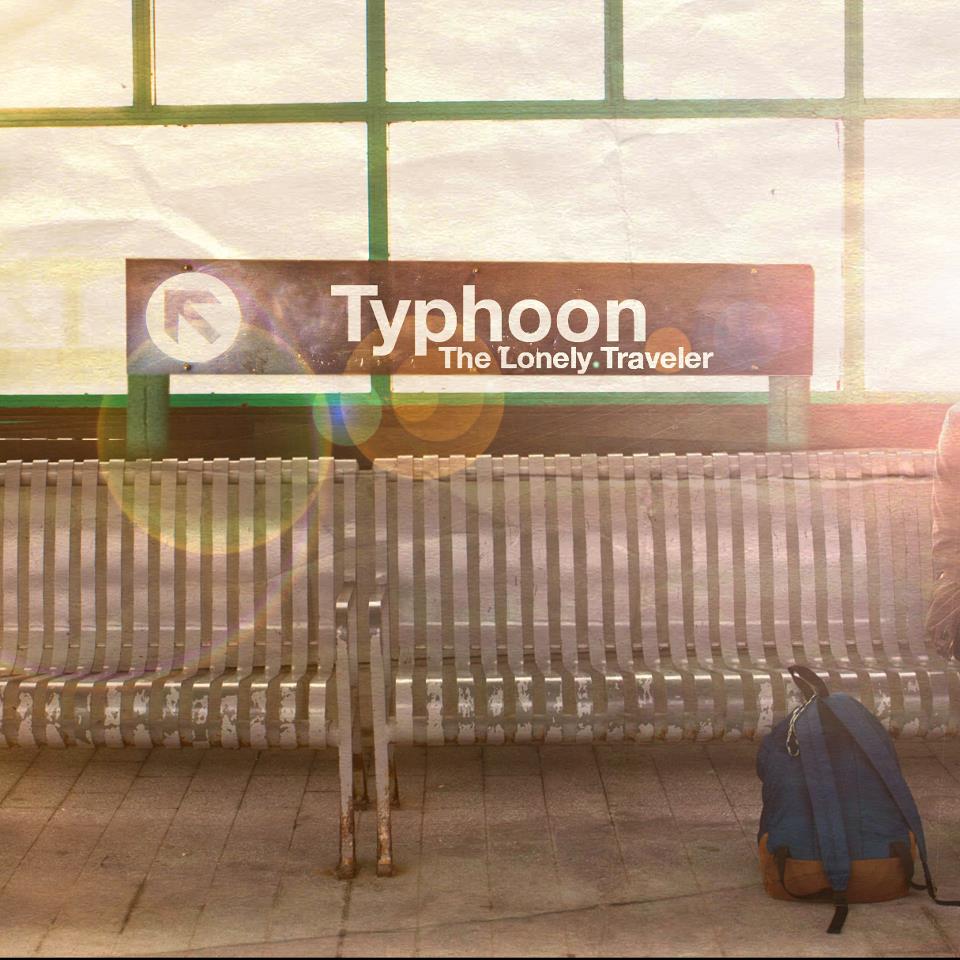 With the release of his first mixtape, The Lonely Traveler rapper Typhoon, AKA Tyler Fearn, has burst onto the scene. A GW student from Dayton, Ohio, Typhoon uses his past experiences and advice given to create a multi-faceted musical experience. He even highlights this wide appeal in his song “Dreamers,” in which he mentions how he raps for everyone, not just others like him. And, in an essence, he raps for GW students as a whole.

Throughout the mixtape, Typhoon drops hints about his life that is common for many GW students. The transition from high school life and leaving it behind for D.C., the shout-outs and influences of his French exchange program (including a French feature on “Hardly Home”) and other aspects of his lyrical content make him seem like GW’s rapper. While his style is definitely unique, his lyrical content and witty, large vocabulary are not only characteristics of GW students but college students around the country.

The mixtape is peppered with features by vocalist Dave Yoon and the inclusion of French rapper Areno Jaz, which provide great compliments to Typhoon. Yoon’s vocal range is proven on songs “We All Try” and “Ms. Kennedy” and is a great contrast to the middle-range voice of Typhoon. And although Areno Jaz can only be understood by French speakers, the contrast of French with Typhoon’s English, along with his great verse afterwards, create a great song.

Finally, the production of the mixtape is noteworthy. Varying in emotional range, Typhoon proves his versatility by matching the feel of the beats with appropriate lyrical content. However, on the 10-song mixtape, there are only two beats that are not orginals, “Big Spender” and “Italian Sugar” and he makes them their own. His bragadocious words are not out of place over the Big Spender beat where his unique ad-libs and candid monologues turns the song into an original. Italian Sugar, over “Suga Suga” (originally by Baby Bash ft. Frankie J), is a surprisingly romantic track that will pull at your heart strings. The description of a romantic night with a beautiful stranger seems like a romantic fantasy Typhoon expertly designs.

Overall, WRGW highly recommends The Lonely Traveler. Not only are the songs’ contents relatable but enjoyable to listen to as well. The combination of his flow, lyrics, features and beats make a nice mixtape with hopefully more to come. Below, we talk to the man himself.

When did you start writing and performing?

It definitely started as something that was just for fun, messing around with some friends from high school, during my freshman year here at college. There were no performance but gradually I started taking it more seriously. I was getting positive feedback from friends on what, in my mind, was throwaway stuff. But they seemed to like it and encouraged me to do more. So I kept at it. At first I was writing over popular beats, and I would often try to imitate some of the flows of the original artist and change up the words. From there, one of the big chaging points was when I was introduced to Dave Yoon, who has worked with me many times since then and has actually been my roommate for the past two years. He infused a lot of technical know-how, he helped me learn how to record and how to work with production a little bit. That picked up around the middle of my sophomore year. That’s when things got more serious, we tossed around the idea of a mixtape. It came together as a logn and drawn-out process. It took us from about the middle of sophomore year to spring semester junior year. Then we released the mixtape that summer.

So it took you about a year and a half?

How much is Dave featured on the mixtape?

He has major features in the “We All Try” remix and the “Miss Kennedy” song. He also has a couple backing features, like in “Italian Sugar.” But in terms of collaboration, he’s involved in every single song. He was the one actually on the computer while I was recording; he would give me feedback on “Let’s do another take” or “That was a good one,” so in terms of that he was there every step of the way.

You talked earlier about imitating other artists’ flow to develop your own. So describe your flow– you have three words.

Three words? I would have to say narrative and personal and… my aim was to be clever. Who knows if I actually reached that level, but I’ll say “clever” as a hopeful.

Why do you call yourself Typhoon?

There actually isn’t a deep story with that. The short answer is it was a nickname passed on to me from my soccer days in soccer. Some of the older guys would call me Typhoon. From there it just became my nickname. As I was doing this sort of hobby/pastime, not taking it seriously yet, I would sign it “The Typhoon.” As I started taking it more seriously, I went with “Typhoon.” 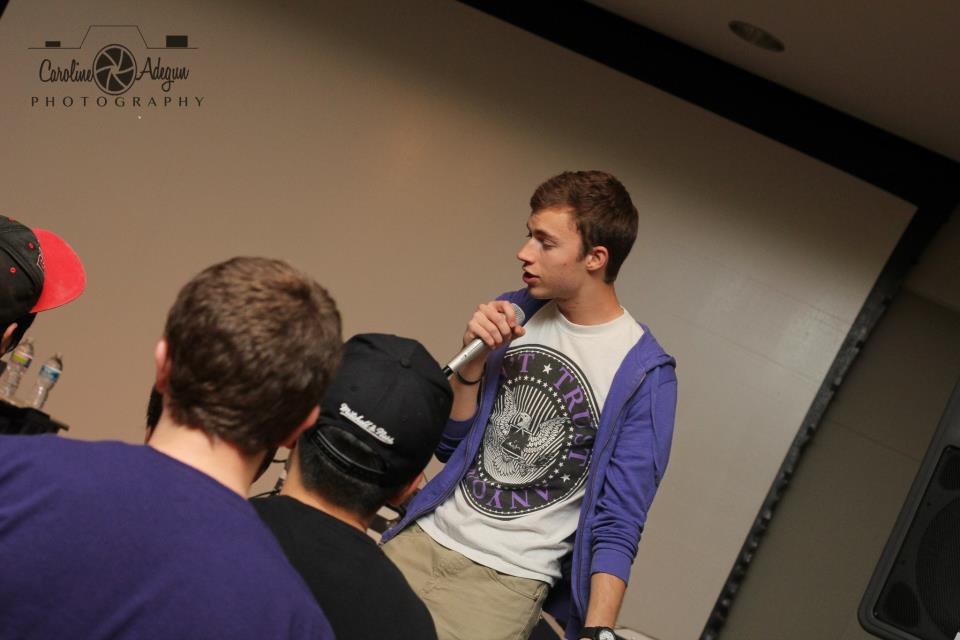 How much does GW appear in your writing?

I think that is a big part of about half the material on the mixtape. Coming from a suburban background, having never lived in a city before, the whole way of life that you get from living downtown in such a walkable city like DC, so many more things are accessible to you. I was really affected by all these new opportunities and lifestyle that was available. From that, GW provided me with this opportunities to learn and experience new things. And I felt really passionate about that so I wanted to include that in my music. There are literal references you can hear to GW, but it’s more than that; it’s also thematic, the themes behind the music in terms of the energy and the opportunity– I really think that’s a good word.

Your mixtape is called “The Lonely Traveler.” In listening to it, the mixtape seems to be about personal growth. It’s interesting that it took you so long, because you get the sense of a person’s trajectory throughout it. So, why “Lonely Traveler?” Why are you lonely? Where are you going?

Good question. In terms of developing the name and the overall feel, that came from some of my earliest material. I was actually writing to the beat “Say You Will,” which was an older beat that a lot of artists were using at the time. For some reason it really spoke to me and I was getting really personal with this verse that I was doing. One of the lines I came up with was “I am the lonely traveler.” I showed it to one of my really good friends and he thought that line stood out to him. He said, “The lonely traveler– that’s you, man.” I didn’t take it too seriously at first. But as I was moving forward with the idea of a mixtape, I went back to it and heard his little reminder in the back of my head. I thought it was something I could actually use because it means something to me.

That’s just from the simple fact that the three main themes in the mixtape are music, travel, and love. You combine those together. Any kid goes through breakups, you know, highs and lows and I was lucky enough to travel a bit from high school to present day and every time I went somewhere new it really affected me in a positive way. I found that it was something I had a passion for and wanted to keep doing. And so I’m just going anywhere, whenever I can. But with that lifestyle, it’s hard to keep relationships that will last those tests. Everything from family to friends to significant others. I think that’s where that comes from. Even something as simple as moving from Ohio to DC for these four years, that is a travel and puts strains on certain relationships. I thought that was something that college kids would understand at some level and I felt like sharing my stories in that manner.

Luckily, Typhoon’s stories are very easy to share. Find him at http://officialtyphoonmusic.com/ where you can stream and download the mixtape!