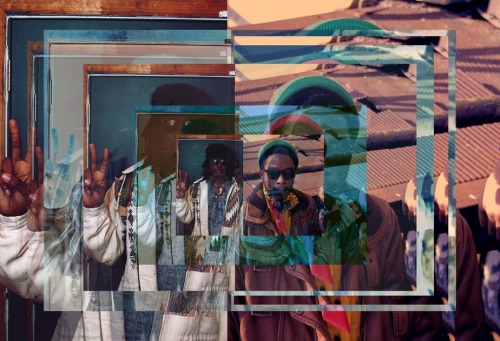 ACME: A COMPANY THAT MAKES EVERYTHING

This past week I had the opportunity to sit down and chat with Cheakaity Brown and Joshua Davis, the masterminds behind the DC band and production duo, ACME.

How long has ACME been around? When did you guys form?

And how did you guys become a band? Were you just like ‘Oh, let’s be a band?’

CB: The whole story, a quick synopsis, is he was doing his own thing making beats. I knew how to make beats, but he didn’t know that I knew how to make beats. And I was in another band, like a rock / hip-hop type thing. It’s funny because he didn’t like my band, he thought it was corny, and I thought his beats were a little corny. Then we met in person because he hit me up to get a grant from the city to do this project and I was like ‘alright, I’ll see what it’s about.’ When we met in person, we were just messing around on some beats and I was like ‘aw, you’re pretty good.’ And then, you know, we just watched each other’s moves. We ended up not getting the grant; the whole thing fell apart. It was the worst thing ever. But I think I left some equipment in his car or something like that? He had to bring it back to my house and I was bored that day so I was like ‘hey, let’s make a beat’, and we ended up making a song and we had fun.

And then ACME was formed!

CB: Then we made an EP and we were like, ‘okay we need a name or something.’

How’d you guys come up with the name? I know it stands for A Company That Makes Everything.

CB: We wanted something that sounded catchy.

CB: We just really wanted something that sounded cool. I was literally watching Looney Tunes one day and I was like ‘Oh, ACME!’ I mean, that’s the obvious thing. But we gotta tell people that means something so it can sound deep. So I was like ‘A Company That Makes Everything.’ Alright, that describes like what our music sounds like.

JD: Right, because our sound is not like one genre. We do a little bit of everything. And the we record it ourselves, mix it; we do everything ourselves. So it’s kind of like a company that makes everything. It just happened to fit perfectly.

CB: Recently, I just started playing sax and trumpet, but before that, my first instrument has always been the drums. After that, I got into keyboard, and that’s like the main thing I do. Then I got into guitar and bass. And I mess with synths and stuff. And I sing.

So are you guys all self taught then?

That’s cool, though! So like you said, it’s hard to pinpoint your music to just one genre. How would you describe your music to a new listener that is unfamiliar with your sound?

JD: And it just combines, just makes something new.

CB: Whatever I’m feeling like at the time, it’s like a reflection of that. In my head I just hear the sounds and what I want to listen to. If it doesn’t exist, I’ll try to make it exist. I’ll be like ‘you know, I wanna listen to something that sounds like this. Sorta like this or like that.’ Or I’ll listen to a song that I really like and think ‘you know what, that song would be so much more awesome if the drums were bigger and hittier’, you know? Sorta like hip-hip type drums. And since we have the ability to make music, we say ‘okay, why don’t we try something like that?’ As a result, we get whatever we make.

JD: But then sometimes it’s really random. We’re just messing around on a computer and I’ll just hear a sound or whatever, and we’ll just go from that.

CB: Sometimes it’s like an accident. A really good accident. I think that’s a good description of the whole thing.

Would you say that there’s a certain artist that kind of inspires you as well?

JD: For me, it’s just like every single artist that I’ve ever heard, combined.

I was listening to your latest EP and one thing I noticed is that it has a bit of a harder and bigger sound. How did the creation process of this EP differ from your first set of songs?

CB: Well, we had something to look at, like a platform to go from. We didn’t even plan on being a band; we just wanted to make a bunch of songs. And it was like alright, people like us. Cool! I was like ‘you know what? I like this. I wonder if we can make something harder and bigger.’ And then we made something harder and bigger. I wonder how far we can go with this thing? So just testing my limits, his limits.

JD: Definitely, that was one of both of our goals for the second EP, to make everything sound bigger. We just wanted to see if we could make bigger festival-sounding music, and I think we did it.

Yeah, especially with the first song, ‘All Around The World.’ It’s gonna be my new summer jam! It’s so big and grandiose; that was one of my favorites.

So what are the future plans for ACME? Are you going to think of working on a full length album? Do you have any performances coming up?

JD: We’re not really sure yet, we’re just concentrating on getting the second EP out, and just making sure as many people as possible hear it. I’m still meeting people that still haven’t heard the first EP. ‘We Got The Love’ is brand new for somebody, so I just really want to concentrate on getting as many people onto the first two projects as possible and go from there.

For some bands, a sophomore effort tends to fall flat to listeners and disappoint. This was not the case with DC’s very own ACME.

ACME’s second EP, Synths, Beats, and Psychedelia, opens with what is sure to be your new favorite summer song, entitled “All Around The World.” The song is bouncy, anthemic, and fun. This is a stark contrast to the next song, “Howl,” which takes lead singer Cheakaity Brown’s soaring croon over a piano-driven melody and crescendos into a hard-hitting finale. “Lightning” is a bit softer than the previous two tracks, serving as a sort of interlude in the middle of the EP. The EP then finishes with “Save The World” and “Turn Me On,” two songs that really encapsulate the darker feel of the entire album.

Synths, Beats, and Psychedelia is a punchier, moodier, and more intense sound than the band’s first EP. It’s ACME demonstrating to listeners the wide range of sounds they’re capable of producing and will not disappoint old and new fans alike.

ACME’s debut EP, ‘Why Not ?’ is available here. Their second EP, ‘Synths, Beats, and Psychedelia,’ was released on July 2 and is available for streaming and purchase here.

0 thoughts on “ACME: An Interview and EP Review”