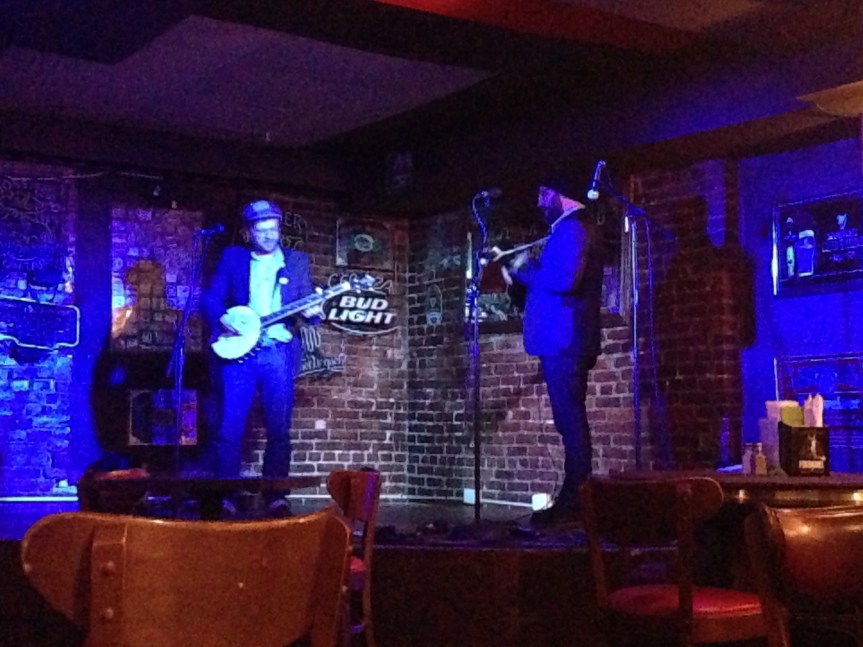 On a warm sunny tuesday night, I couldn’t decide where to get dinner. So, on a whim of habit, I decided to go to a neighbourhood bar for dinner and a decent pint. This neighborhood bar was the Bier Baron on 22nd and P. Before you enter the Bier Baron, it’s a rule for them to check your IDs, regardless if you’re ninety or twenty-one. The guy gave me back my ID and said, “Both the upstairs and downstairs [bars] are open, the upstairs have this folk act from Canada and a better tap selection.” Naturally, as a fellow Canadian, I decided to see what this act is. I was a bit wary at first. You never know what could happen at the Bier Baron in terms of events; it ranges from the oddest burlesque show you’ve ever seen to a decent musical act. And on that summery day, it was definitely an event of the latter variety.

To say Old Man Luedecke isn’t sweet is to say that cupcakes are not sweet, either. He is a charming man which is obvious through the stories he tells before every song. There were tales of Matt Groening buying his music (thanks to the magic of Paypal), and A&W drunken drive-thru adventures. I had not heard of Old Man Luedecke before but by the third song, I was texting friends to inform them that I was witnessing some great folk music. The show was not seen by more than eighteen or nineteen people (including the three members of the Bier Baron staff), which made me sad. It made me sad to see such a talented musical act not gain more attention. I felt like people were missing out on something lovely. His banjo skills were amazing and his partner Joel’s mandolin sounded quite nice as well. Between songs, Old Man Luedecke would sneeze and/or cough and it was evident that he was battling a cold. Nevertheless, he put up a brave front, and played quite well. During the first of two encores, there was a request for a certain song. They started playing the request, but because it wasn’t a song they played regularly, there were a few false starts. It just showed what Old Man Luedeke’s act was about: every song felt honest and true as if he was singing to a group of close friends. I think by the end of the concert and the two encores that followed, I felt like I was his friend as well.

After the concert, in an nearly empty Bier Baron, Old Man Luedecke and I had a lovely conversation over some beer:

WRGW: What would you describe your music as? Would it be more like bluegrass?

OML: I don’t think there’s a genre for that though.

I don’t know, I’m trying to convince myself there is a distinct “Canadianess” [sic] to Canadian music.

So it’s been a while.

How did you get into this?

OML: Well, I bought a banjo and I was looking for a way to express myself. I liked to write poems, and when I play the banjo, the words seem to fit right there.

So you started learning the banjo when you were 27 or so?

Oh, ok. ‘Cause you were quite good at the banjo.

OML: Oh thank you. I found the banjo and, well this is something that I love. I love the music, I love the cultural background, I love the way lyrics sound with it.

I noticed that most of the songs in your set were from personal experiences. A fair amount, actually.

OML: Yeah, they are very personal.

Is that how you get into songwriting and such?

So like the A&W song with the drive thru?

OML: That’s not….I just made that shit up.

So how long has this tour been going on?

OML: It started out in Buffalo two or three weeks ago.

And you’re trying to cover as many towns and…

OML: Yeah, in Canada, Australia and the UK. I’ve played in Europe but yeah, I mostly play in Canada I guess. I toured Australia the year before.

Is it hard to tour in the US because I’ve seen a lot of Canadian artists and DJs try and come tour in the States and they try to get the bookings. And if they have the bookings, it’s the work visa that usually screws up.

OML: Well, I got the work visa. So that’s not the problem. The problem is I have never done this before. It’s kind of like going a bunch of years back in my career.

I guess you have to jump right into it?

OML: Yeah, it’s nice. It’s fresh. It seems like it works out.

OML: I wish there were four, five times more people than this.

OML: But the music is the same, and if people like it, I can get off just as easily. There’s a rush when there’s a lot more people than this situation. As an artistic experience, it’s probably just the same. If you play well, and you get the right feeling, then you get the same result. But yeah, I wish there were more people.

Yeah, sometimes there is this intimacy that you just don’t get with big shows with like 200 or 300 people.

OML: Yeah, I’m pretty good at that I can interact with them pretty well.

I noticed you were blowing your nose a few times and you hit some high notes there. How did the cold affect your set? Was it a challenge?

OML: It was only a challenge, there was a couple points where I got worried. No, the high notes aren’t that much harder to hit than the other notes. It’s just that…I mean, you get a little overwhelmed. But adrenaline clears it up….well, I can do my job for a concentrated amount of time. I can push through anything to get to the place that I need to get to.

I take it this is your first time in DC?

OML: I’ve never played a show in DC before. I played on SiriusXM earlier today. I played at WAMU last fall. But never a show in DC.

So where are you guys going after tonight?

OML: We are going to Berryville, Virginia and then Broadway, Virginia. And then we go up to Boston on Friday, then Florida on Sunday. There’s a really good gig down there, so we’ll go down.

Wow, that’s quite a lot of traveling in a short time span.

OML: Yeah, we’re flying so it won’t be too bad.

I was reading some reviews earlier, during the intermission, that said you used to play alone?

OML: I did until a year and a half. I am quite comfortable with that. I like play with Joel though. It’s great.

So how different are the sets?

OML: Oh, it would be the same show if he [Joel] wasn’t there. But because I play solo so much, I would play with different songs. I have a lot of songs that many people haven’t heard of. And for those who know my songs, I can jump around.

I noticed, I was very impressed how you could get random requests and play them right there and then.

OML: There were people who knew the stuff! It was kind of nice. There may not have been many people here, but the ones that were were fans.

Yeah, they were buying vinyls and CDs and trying to get you to sign them.

OML: It’s nice, It just shows I should come back more often.

Well, congrats to you, that was a very good show.

We made a few more minutes of small talk, talked about CBC Radio 3’s influence in bringing up and coming Canadian artists to the spotlight. We talked about the cherry blossoms, and other stuff as well. Everyone who went to the show came up to him and had a short conversation with him before they left. It was quite intimate. Before I left, the beer buff in me had to ask him about his favorite beers:

Since we are at the Bier Baron, a place dedicated to beer, I want to ask you what your favorite beer is.

OML: I don’t really have one that I like. I quite enjoyed the Czech Budweiser, Budvar. But yeah, I don’t have any beer that sticks out.

No favorite beer? What do you drink back home?

OML: Moosehead? It’s cheap and the local lager back home. It’s not bad.

Here is Old Man Luedecke  performing “I am Fine (I am, I am)” in his hometown of Chester, Nova Scotia: