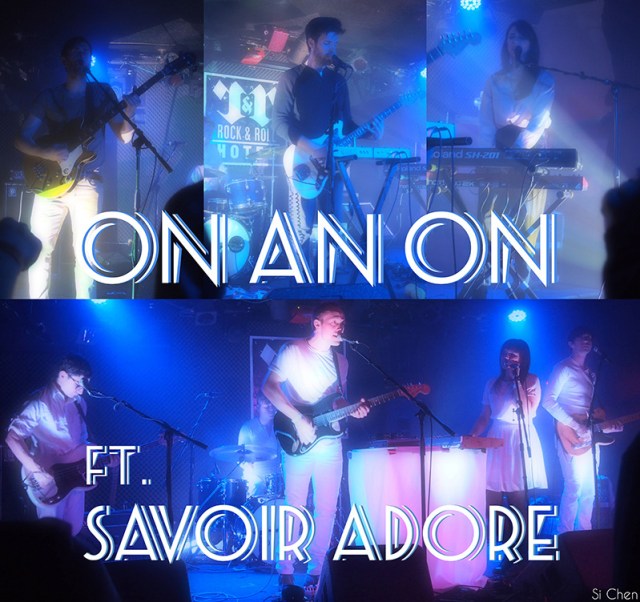 I made my way to the Rock and Roll Hotel last Thursday to see Savoir Adore and ON AN ON perform. After a harrowing taxi ride that felled a bicyclist in rush hour traffic, I didn’t exactly feel up for the promise of a mellow and ethereal indie pop concert, but both bands brought out a raw energy that was simply infectious. With their genre-transcending music and personable stage presences, Savoir Adore and ON AN ON gave truly intimate performances at the venue.

Savoir Adore opened the concert, walking onto the stage in all white outfits. As the lights switched and they were swathed in a soft blue glow, the all white outfits made much more sense. Following in the line of their fantasy-like music, the changing colored lights clouded them in a haze that lent itself to the mood of their set. Starting off with “Garden”, Savoir Adore immediately captured the attention of the people milling around the entrance of the venue, drawing people closer to the stage. Although the sound balance at the beginning made the drums sound almost painfully harsh, as the venue filled up and there was less empty space, the drum reverberated less. As they segued into “Loveliest Creature,” the mellow ambiance gave way to a much more upbeat mood that was followed by their live rendition of a new unreleased track to appear on their upcoming rerelease of Our Nature. The crowd response was overwhelmingly positive to the new music and created an infectious good feeling with people finally starting to let loose and dance. Even in the face of technical difficulties before “Sea of Gold,” Paul and Deidre joked about it and brushed the complication aside. Savoir Adore’s “Bodies” really stood out in their set, showcasing Deidre’s full and breathy singing voice which juxtaposed nicely against Paul’s. Ending with their single “Dreamers”, they left the stage to a great response from the crowd, with people echoing positive sentiments about the band.

As ON AN ON took the stage, an interesting collection of videos flashed across them, graphics and images constantly moving and changing as they played. Nate’s voice, distorted to have a glitchier feel, was a positive surprise and added texture to the music without being overbearing. They quickly moved from the first song of their set into “War is Gone”, switching to an upbeat vibe. Their following live rendition of “American Dream” felt much more insistent than the album version, the drum line constantly surging forward and making the lyrics of “you’re gonna be a star” feel like a promise. “All the Horses” proved to be wonderfully breathy in real life, the one part in the song where all three band members sing in unison enhanced the song live and let it transition into a high energy jam towards the end of the song. The energy was sustained into “The Hunter”, it’s rock and roll elements much more evident live. The slightly aggressive electronic feel of “The Hunter” built up musically to the lyrically and emotionally aggressive “Cops”, whose full sound really filled up the venue. As they ended the set with the song “Ghosts”, ON AN ON got the crowd dancing to its catchy melody and left many shouting for more, which they obliged as they returned with “Every Song in the World” as an encore. My favorite song of their album, “Every Song in the World” was a great way to end the night. The song swelled and intensified, the crowd mesmerized, as it faded into the last strains of the melody. ON AN ON, despite having a generally shoegaze-ish feel, amplifies its music in its live performances. The vocals are dreamier, the bass reverberates even more, and the melodies are more haunting. The sheer energy infused into the performance made it a great concert and the seamless transition between songs gave the performance a roundness and wholeness that captured the emotional landscape of the songs.