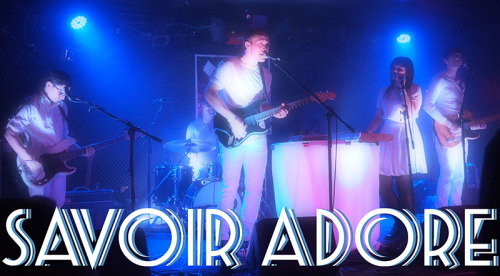 I recently had the chance to talk to Paul Hammer and Deidre Muro from Brooklyn-based group, Savoir Adore. Known for their adventure pop style of music, Savoir Adore’s records tell elaborate tales filled with fantasy. Their rerelease of Our Nature this summer is definitely a record to look forward to but in the meantime, check out their recently released Dreamers EP.

Si: Let’s start off with your name: it’s French for “knowing love”. How did you want that to play into your music, into your lyrics?

Paul: Well honestly, when we first came up with the name, it was sort of a spur of the moment decision. We needed to come up with the name and we had recorded this song in French and it was really just as simple as, what’s important, you know? It just came out.

Deidre: It was so spur of the moment. We say this all the time, but it’s so ridiculous—we made it so that we could make a really quick Myspace page, like this is how long ago this was. Six years ago, we had to make a quick Myspace to share files with each other so I could hear the balance of the song when I went home.

Paul: We didn’t know that much about posting, we didn’t have a website or anything, so we were like, oh, we need a Myspace just to show each other the track. And that’s pretty much it. And from there, I think the idea has always just seeped in very subconsciously.

You started writing music at NYU and it started off as a competition, how did it evolve from there? Is that competitive aspect still there in the songwriting?

Deidre: It wasn’t as much a competition as much as it was a challenge that we gave ourselves, but it definitely has evolved into, well, it’s interesting because we try to challenge ourselves to do new things and do things we wouldn’t normally do with our own tendencies and tastes and things like that. You know, it’s always changing how we write music and I think we have settled into a more comfortable way of how we make music now but we still consciously try to spice things up and not get complacent you know.

Deidre: Like that salsa over there, it’s got a kick.

“Dreamers” is a little bit more electronic, are you trying to steer in that direction?

Paul: Yeah, around that time, after our first record, we spent a lot of time around it and also playing a lot of electronic bands. And at the same time, we’ve always had synth materials and electronic stuff in our music but I think we became more and more interested in incorporating that in a dance-orientated concept. But, “Dreamers” I think was the first [single] we released from the record, but yeah the record overall, Our Nature, has a more electronic and dance-orientated production overall. So there’s a lot of that in the new record.

Are there any musicians or experiences specifically that influenced that?

Paul: Lots. There were partners in crime in New York. French Horn Rebellion was a band we played a lot with, Deidre’s married to one of the two members of the band and we’re connected in many other ways besides that too but…

Deidre: But they’re always really making music parallel with us and we’re influenced by them. They’re making electro stuff.

Paul: And I think our tour with Cut Copy, which we toured with a different band (we were in a different band), we opened for Cut Copy and that was eye-opening in terms of seeing how a band blends those two worlds, the sort of rock and roll elements of a drum set and a guitar but then there’s also all of these synth materials and dance beats and it’s like, that sort of context seeing a band play within a dance club and people losing their minds. That’s such a cool blend of the two worlds and is something that I think definitely influenced the stuff we do.

All of your albums go along a sort of fantasy-like storyline, do you guys come up with that at the very beginning of songwriting or is it something that develops?

Deidre: It’s happened both ways, the first one was very intentional and we came up with the song titles first so that kind of shaped the whole thing, and that was “The Adventures of Mr. Pumpernickel [and the Girl with Animals in her Throat” EP. And yeah, it’s been consciously different every single time, our most recent record, we didn’t have a story really until we were halfway through writing the material on it.

Paul: This time around, the story developed halfway through and we kind of took it from there almost, we were in it from there really.

You expanded from the two of you in the band for touring—with choosing which people to come tour with you, what were some considerations you took in musically and otherwise?

Paul: Yeah, we have. And Ben, Gary, and Alex are actually three totally different members from what we first had. There are many different reasons that go into it you know? We play with a lot of musicians that are in other projects, Deidre’s husband for example, who plays in French Horn Rebellion, he was our guitar player but they ended up getting too busy so obviously that couldn’t work anymore. It comes down to, I think, most importantly, people who are inspired by the same kind of things as us and excited about the same things.

Deidre: And being on the same page, even personality-wise, really helps. Being a great musician is very, very important but gelling as people really helps.

Paul: We’ve always found it very important to work with people who, personality-wise [are very similar]. Because there really are a lot of great musicians and that sort of presents itself pretty quickly and also, to know that you’re going to spend two or three or four weeks with people, it’s important for us to know that we play with people who are also pretty “dumpy” in a way? Dumpy? We use this word to describe people who don’t take themselves too seriously, they’re fun. Basically, it’s hard to find people, it really is. And I think there’s a reason why, it’s hard, you spend so much time with these people and every night, you play music with these people. There needs to be that sort of…everyone needs to be on the same page.

If there was one of your songs to listen to, which one would it be?

Paul: I would say “Dreamers.”

Paul: We have some songs deep in our catalogue that would be so unrepresentative of where we are now, it’d be really funny. But that would also be fun to show.

Deidre: We’ve changed a lot, and intentionally. But “Dreamers” is the current thing.

You’re about to embark on a long tour, tell me about the craziest thing you’ve ever experienced while on tour.

Paul: Well there’s always the North Carolina situation. Well, it’s actually not that important. It’s just that we learned a lesson very early on that you don’t drive thirty hours straight. It might seem like a good idea, everyone’s like “Let’s go!” but we were in Texas and were like, let’s get back home, let’s get straight back to New York. Not a good idea, because then you have a car full of delirious people by hour fourteen and it’s dangerous. What’s another?

Deidre: All kinds of weird things, we had a hotel in LA once where I slept on a bed for five nights that was essentially a plank of wood.

Paul: The bed must have broken and they just didn’t replace the mattress.

Deidre: The weirdest part was that I enjoyed it because I like a really firm mattress but I think I went to sleep and woke up in the same position, like straight.

Paul: And by the end, Deidre was like “I feel great!” That was pretty weird. Most of our stories are just silly little stories like that, like a hotel room or being delirious.

Your music kind of transcends genres, so if you had to make up a genre name, what would you call it?

Paul: So, we used to say fantasy rock, now it’s fantasy pop, but I like adventure pop. Or storybook pop, story pop? No, no, adventure pop.

And are you guys coming out with any new material soon?

Deidre: Well, our record that was out last fall is being rereleased on Nettwerk. And we have a new song that we made for the rerelease and that’ll be on there.

Paul: Also, we released a cover of “Hold Me Now” today but that’s about it. And hopefully in the summer, we’ll start working on new music too.

Thank you to Paul and Deidre from Savoir Adore for taking the time to speak with me and Jeff Ballard from Nettwerk Records for coordinating!