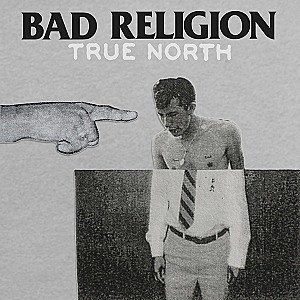 Bad Religion released their first album, the aggressively intellectual How Could Hell Be Any Worse?, in 1981. The album’s uncompromising hardcore punk style earned the band a dedicated cult following which felt completely alienated by their second album, 1983’s ponderous, progressive and pretentious Into the Unknown. In 1985 the band acknowledged their misstep by releasing the EP Back to the Known which signalled a return to the melodic hardcore style that most fans had been craving. Over the next 28 years and 14 studio albums, fans have always had to wonder before each new release which Bad Religion they were going to see. When 2010’s The Dissent of Man featured quoted Rush melodies and a horribly out-of-place cameo by Tom Petty And The Heartbreaker’s guitarist Mike Campbell the smart money would have been on the band veering back towards their punk roots with their following album.

On January 22nd, Bad Religion released their 16th full length studio album True North which signalled yet another return to form for the aging punk legends. Anyone who has listened to a Bad Religion album over the past 20 years will find True North incredibly familiar as an above-average exemplar of a “fast” Bad Religion album. On-again-off-again guitarist Brett Gurewitz delivers blistering hardcore riffs supported by Minor Threat/Dag Nasty guitarist Brian Baker and Circle Jerks guitarist Greg Hetson creating a heavy, multi-layered sound that shines on tracks like “Dharma and the Bomb.” Long-time frontman and songwriter turned Ivy-League biology professor Greg Graffin continues to write insightful, anti-establishment lyrics that will have even the most erudite english majors reaching for their dictionaries frantically looking up words like “precariat” and “metacognition”. The venerable group continues their tradition of soaring multi-part vocal harmonies especially on “In Their Hearts is Right” where the chorus almost seems like it would be more at home on a broadway stage than in a dingy basement venue in southern California. The stand-out tracks on the album are arguably “Past is Dead”, which starts with a brief folky dirge before exploding back to agressive hardcore, and “Robin Hood in Reverse”, a withering rebuke of contemporary plutocracy and a certain infamous Supreme Court decision. Despite generally exemplifying the “good” side of Bad Religion the album does drag at times, particularly with the plaintively mournful but thoroughly unexciting “Hello Cruel World.”

The bottom line: if you’re a fan of Bad Religion’s recent work, particularly their faster, more agressive hardcore albums, you’ll be a fan of this. If you’re hoping for something that sounds like their more progressive, poppy albums you’ll be sorely disappointed and that’s probably a good thing.